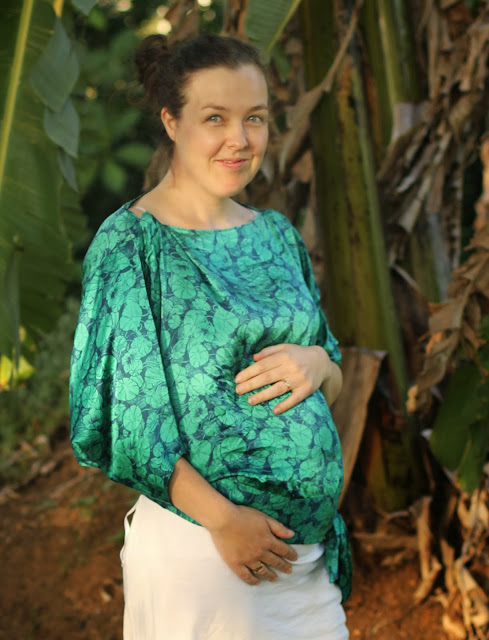 Posing under the banana trees at 25 weeks pregnant. (Clothes thanks to St Vinnies & the Salvos)

You are getting bigger and bigger. You are about 35 centimetres long and if you were born now would have a reasonable chance of living. Your big brother asked how big you were today, and I showed him pictures on the 'net of how you're all folded up like a pretzel. There was a photo of a teeny tiny little premmie baby and it was so amazing to see how small, and yet how perfect you are.
You remain a night owl, only really waking as your brother and sister go to sleep. We tried to hear your heartbeat with the stethoscope a few days ago, but you were playing hide and seek. Maybe in a week or so.
You still kick a lot - especially once the sun has gone down - and recently had hiccups.
My milk has started to come in, which made me smile when I first discovered it. It's not really that long since it left - I still had some from Poppet in the early weeks of your growing. While Poppet's been weaned for awhile now, she was asking for 'sneaky milk' right up until a few months before you were conceived. I remembered how amazed I was when I first had milk when I was pregnant with the Sprocket. I'd always assumed there was just one milk hole that milk came from, you know, like a cow, so was a bit perplexed to discover there are many little holes, more like a shower head.
I have also started to waddle. Your Daddy assures me it is a very beautiful waddle, and that if he were a duck he'd follow me, but it is a definite waddle.
I went for an early morning walk this week, (and was entranced by creamy frangipani scattered on lush green grass) and didn't drink enough water - my blood pressure plummeted and I went all dizzy again. Reminder to self: Water. Water. And more water. And then more water.
Your Aunty Bec and I went on a big op-shopping expedition and I updated my wardrobe as clothes are getting a tad tight. Op-shops don't have a great range of maternity stuff, but I found lots of stretchy, elastic-y stuff that should see us through. Can I just say that there is a shocking dearth of skirts and trousers with elasticised waists? Someone should get onto that! Quite a few of the volunteers at the shops (God Bless them) asked when the baby was due, and then gave me pitying, startled looks when I told them we still have nearly four months to go. Only one actually informed me that I was large for my dates and you'd be a big baby. And I'm prepared for it. Your brother and sister were both over four kilos so I'm not terribly optimistic you'll be any smaller, but it's a bit depressing hearing a complete stranger state it.
You're kicking now, as I sprawl in bed, watching my tummy jump with your antics, enjoying the cool of the night and listening to Celtic Dreamland, the same CD I put your sister and brother to sleep to. Your daddy's out fishing, your brother and sister lie sleeping. The curtains are moving in the welcome breeze and all is still and quiet.
Goodnight my little one, grow well.

Posted by kirstyrosa at 4:58 AM