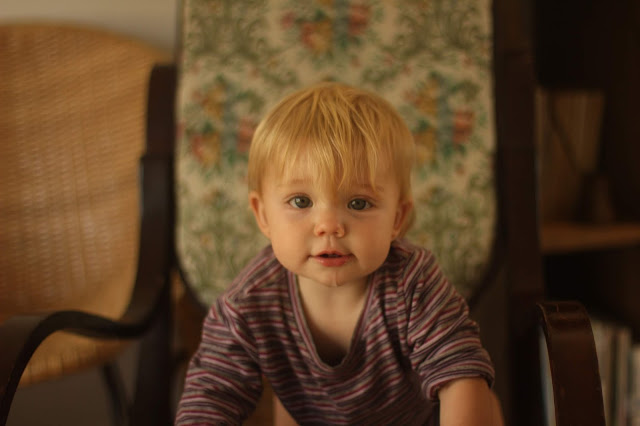 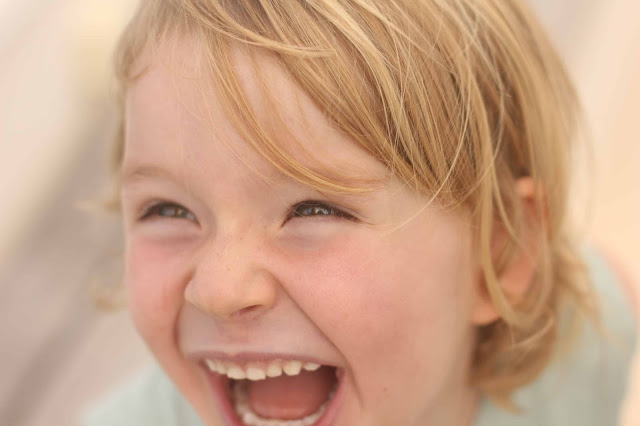 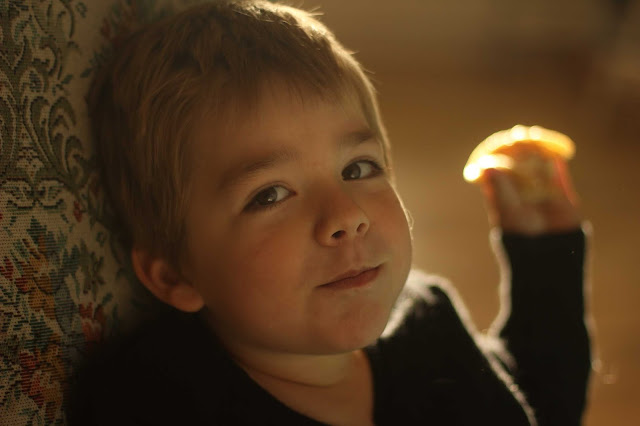 Giggle-Bear - my brave adventurer. She's still not walking, but man, does she love climbing. She's just managed to get up into the rocking chair and has been practicing 'surfing' on it. She thinks this is hilarious - especially if she's standing up. She also loves scrambling from one chair to the other. Halving already had one climber (and he started later) my heart has sunk... But it is very cute.

The Extravaganza - A friend came up from Victoria and we went on a ferry up at Caloundra, going along the passage between Bribie Island and the mainland. The Extravaganza loved it.

Adventure-Boy - still for a moment while he has some pancakes for breakfast. He's wearing an old jumper of mine as the mornings have been getting chilly. (She says mounrfully. I still miss Victorian seasons. There has been no Autumn here and when I say 'chilly' it is still not cold enough to wear socks during the day.)

Joining with Jodi for a portrait of my little ones once a week, (nearly) every week in 2015.
Posted by kirstyrosa at 5:56 PM 1 comment: 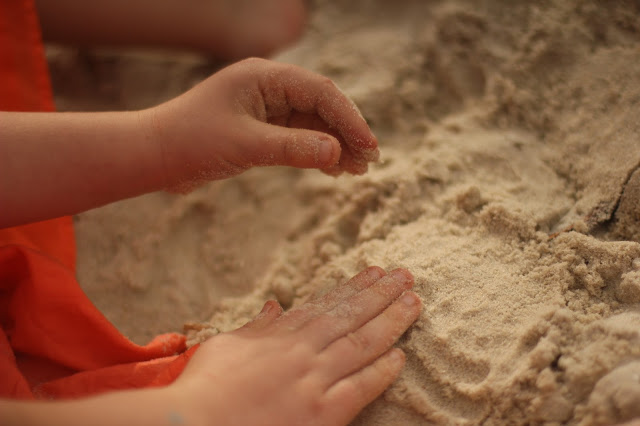 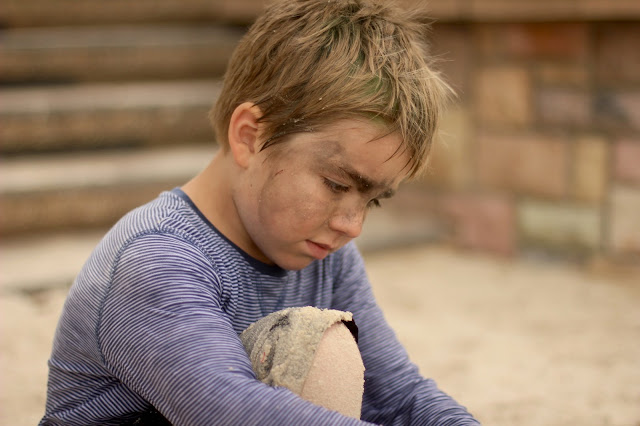 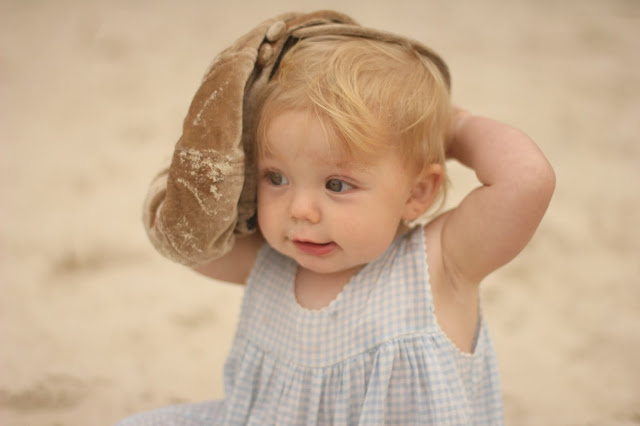 Adventure Boy - green remnants of Crazy Hair Day at school, black remnants of his batman mask from face-painting - sand courtesy of the beach at Southbank. Not actually camouflage (intentionally!) but getting close. Concentrating on his sandcastle. He has, obviously, already jumped in the water.

The Extravaganza, tenderly constructing her sandcastle, gathering up treasures people have left behind for its adornment.

Giggle-Bear - playing with her sister's hat. Momentarily pausing in her study on the properties of sand.

Joining with Jodi for a portrait of my little ones most weeks in 2015. (I'll try to catch up on last week soon!) We are still busy unpacking and tinkering with our new house and training our unruly pup. I have no idea where the days are going.
Posted by kirstyrosa at 3:49 PM 18 comments:

And the rain came down. 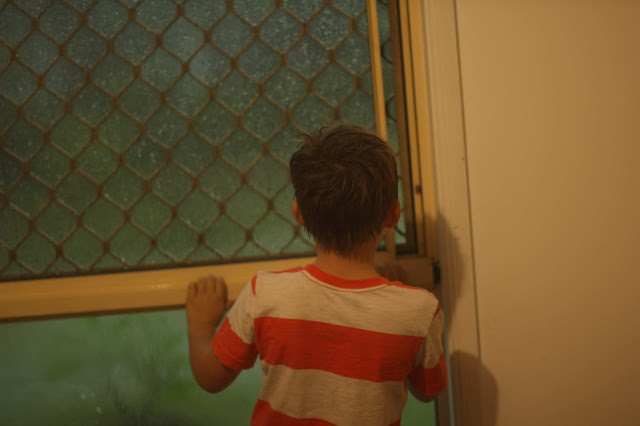 Posted by kirstyrosa at 1:39 PM No comments: 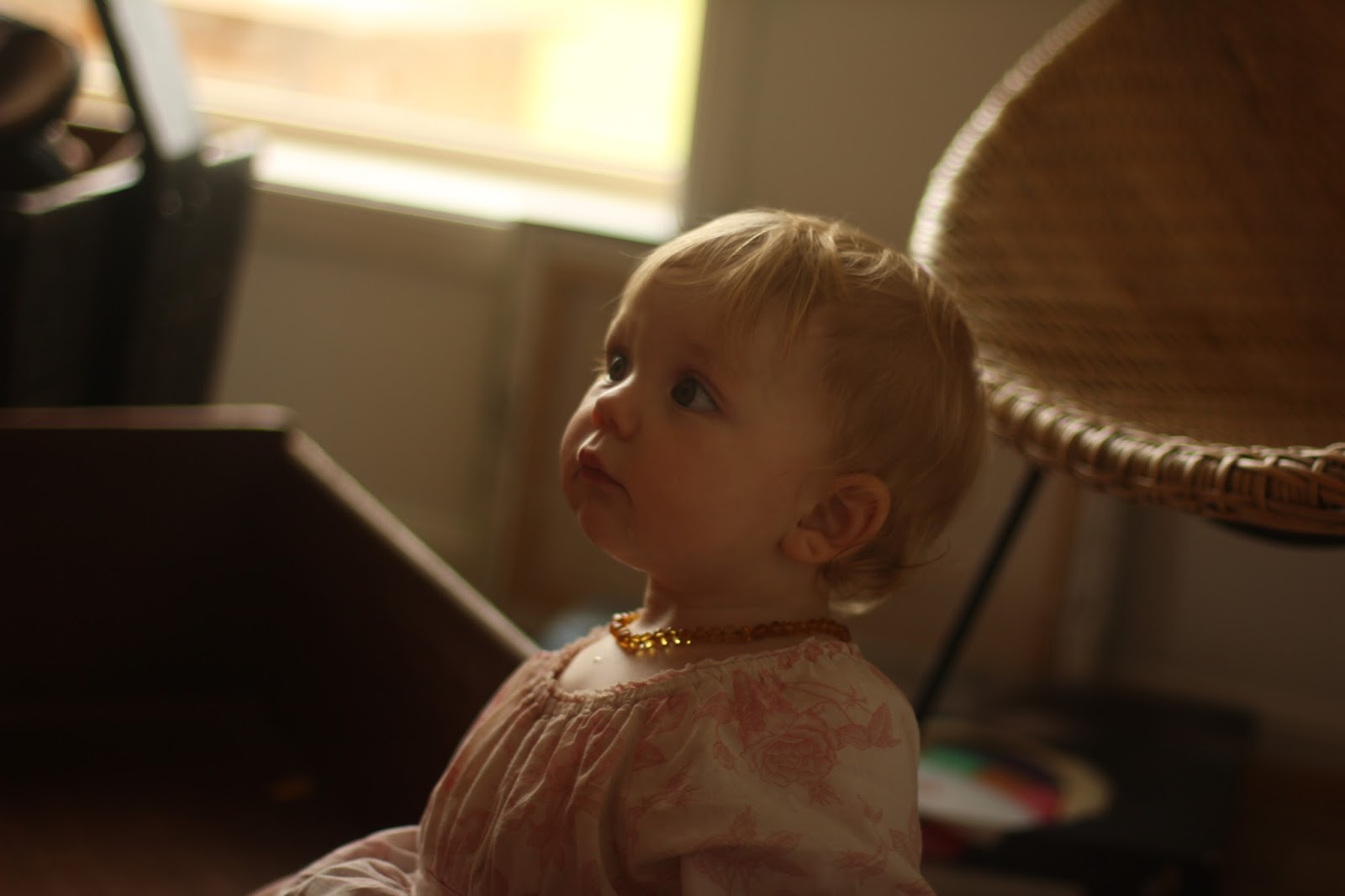 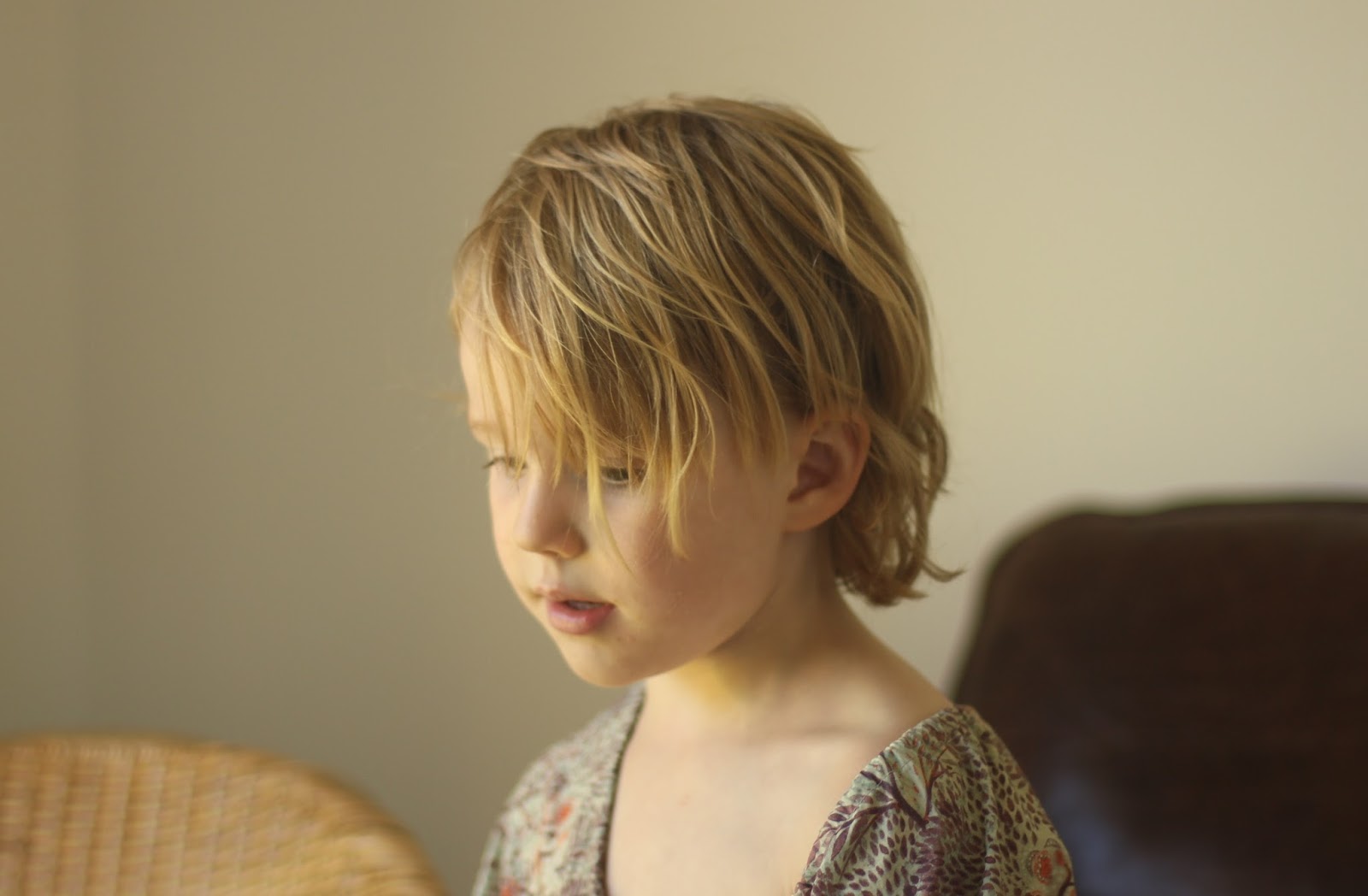 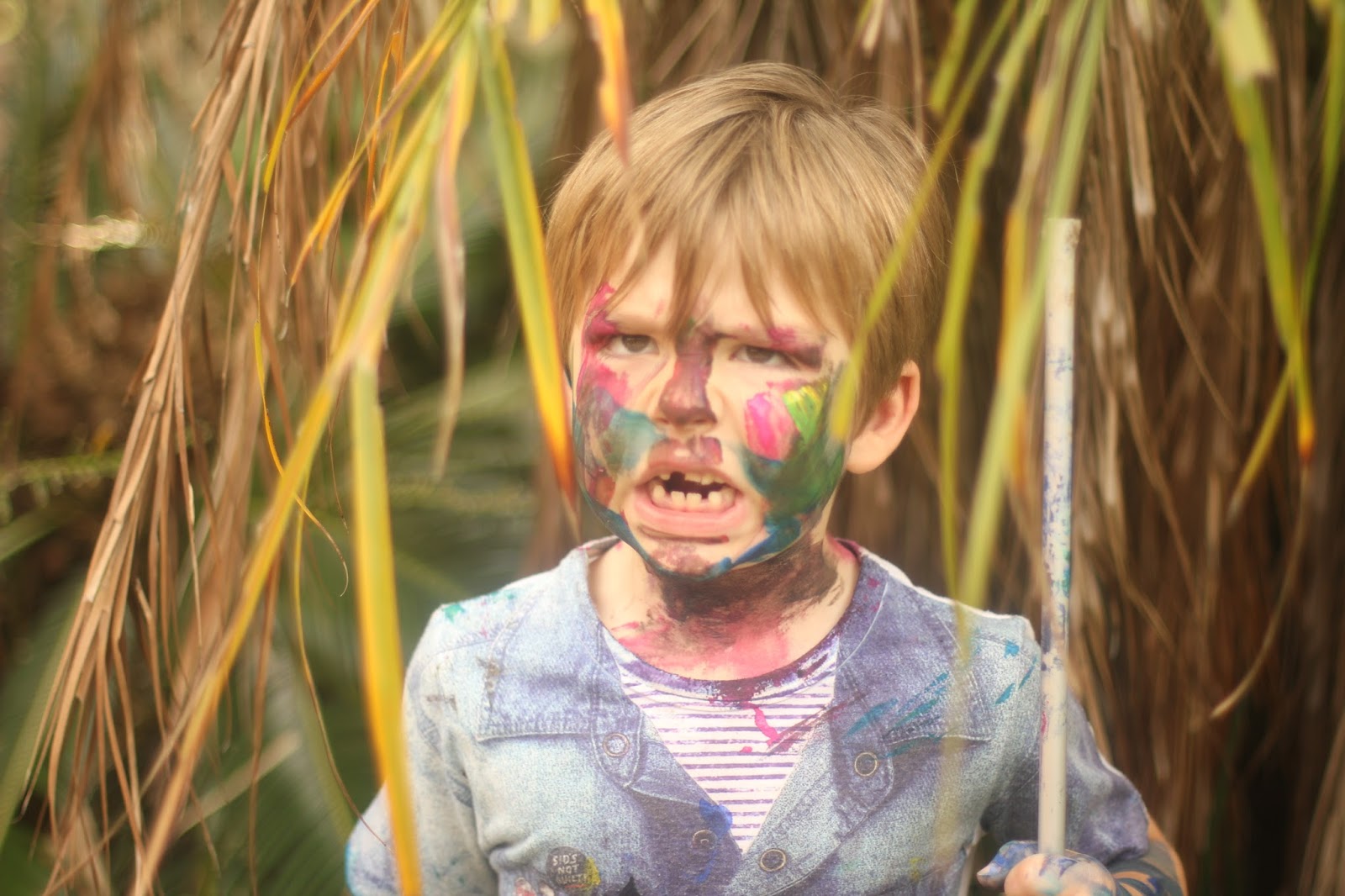 Giggle-Bear - helping with the unpacking. She's climbed into the drawer of one of the wardrobes.

The Extrvaganza - I can see her as a young woman in this photo. She's only four but so wise, so loving, so imaginative, so confident, so... um, assertive.

Adventure Boy - this summed up the school holidays for me. While I was feeding Giggle-Bear the kids got into the paint. This was before 8am in the morning. The bath-water turned a rich brown. 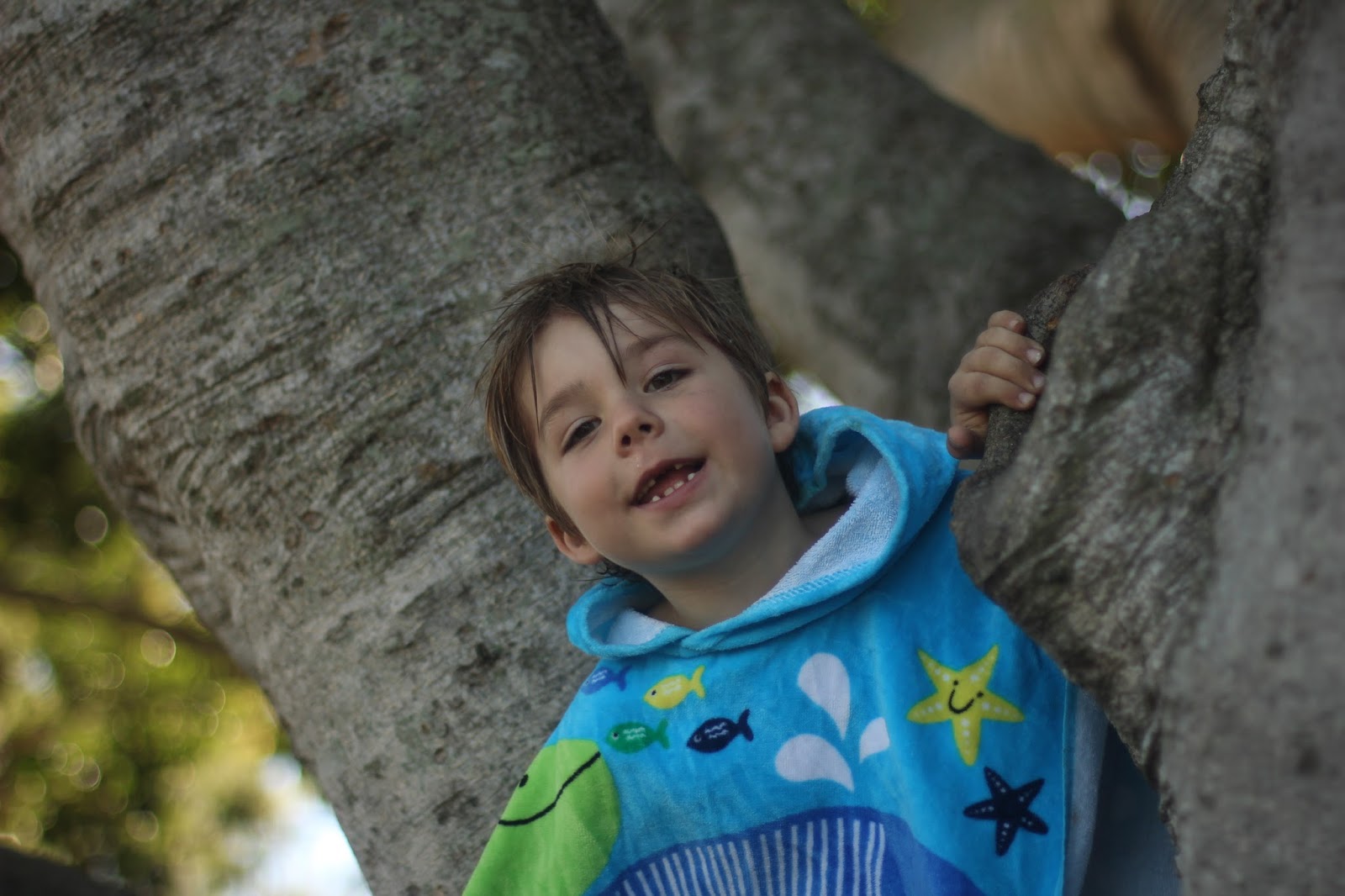 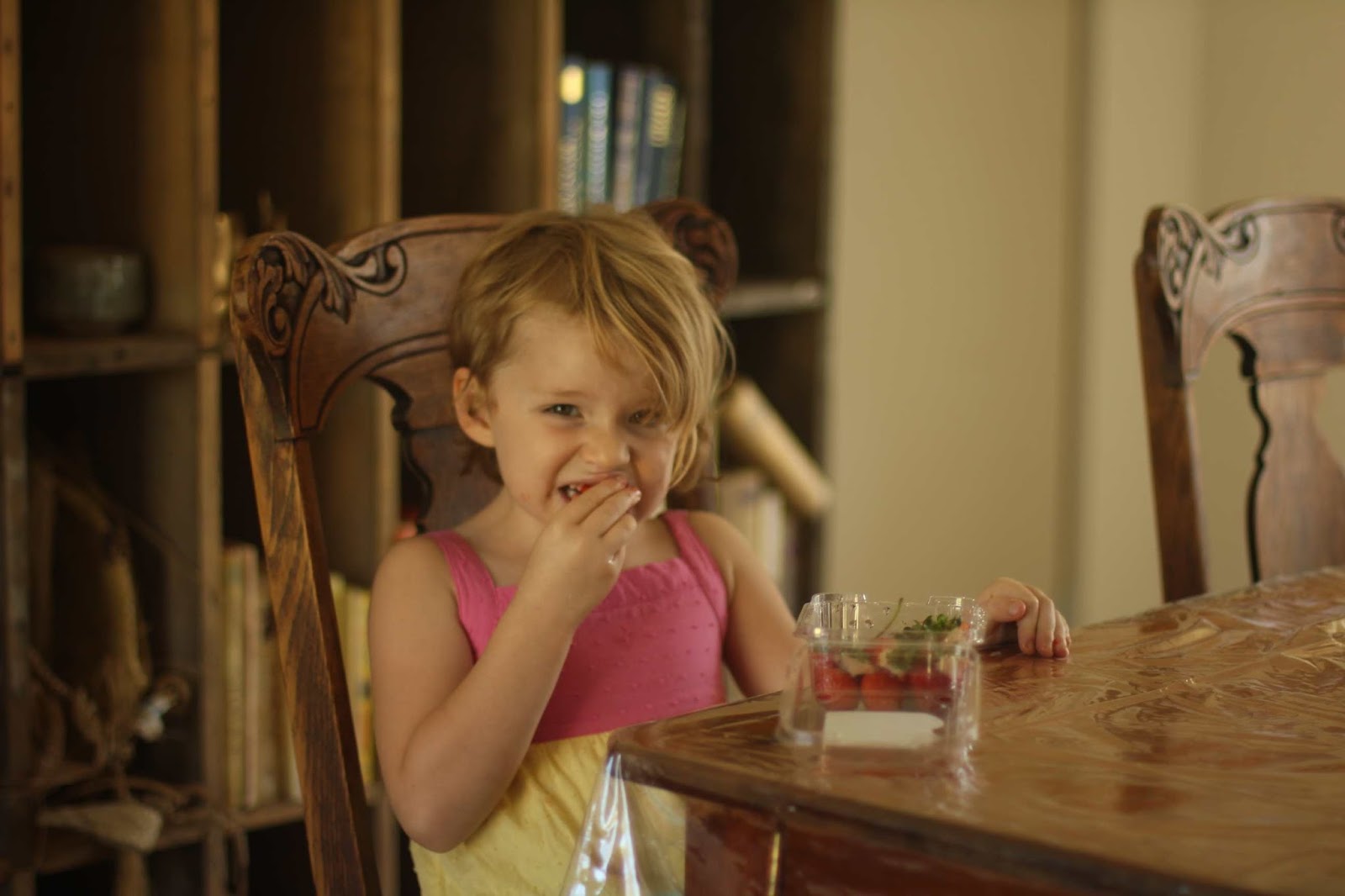 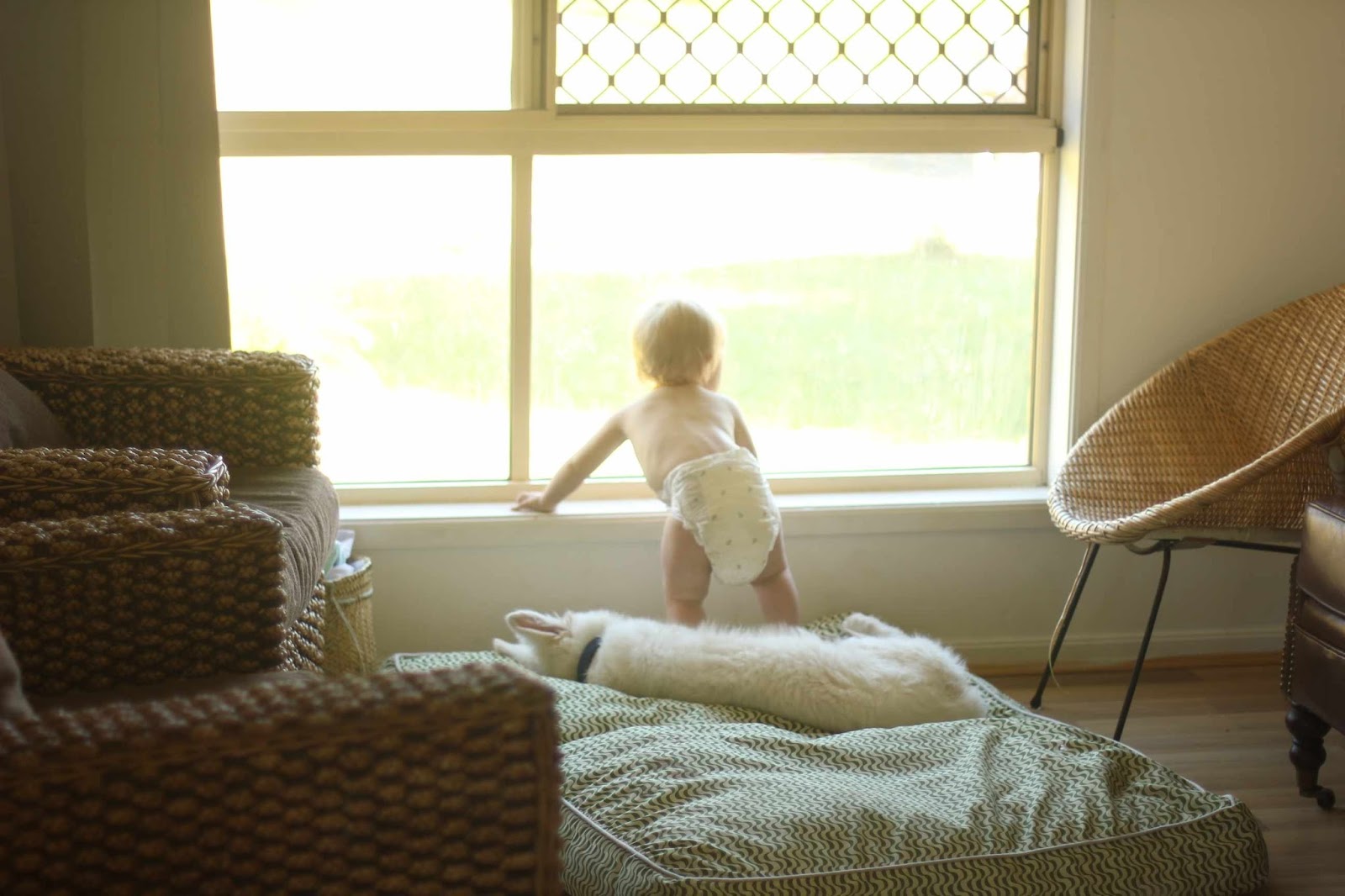 Adventure Boy - over at bribie Island, he's gone for a swim, now he's climbing a tree. Always on the move.

The Extravaganza. My strawberry girl. You might just be able to make out some of my newly unpacked books behind her. I've (shock gasp) decided to catalogue by colour this time. I have a preponderance of black, green, blue and white spined books. Who knew?

Giggle-Bear. The babies, waiting for everyone to come home. 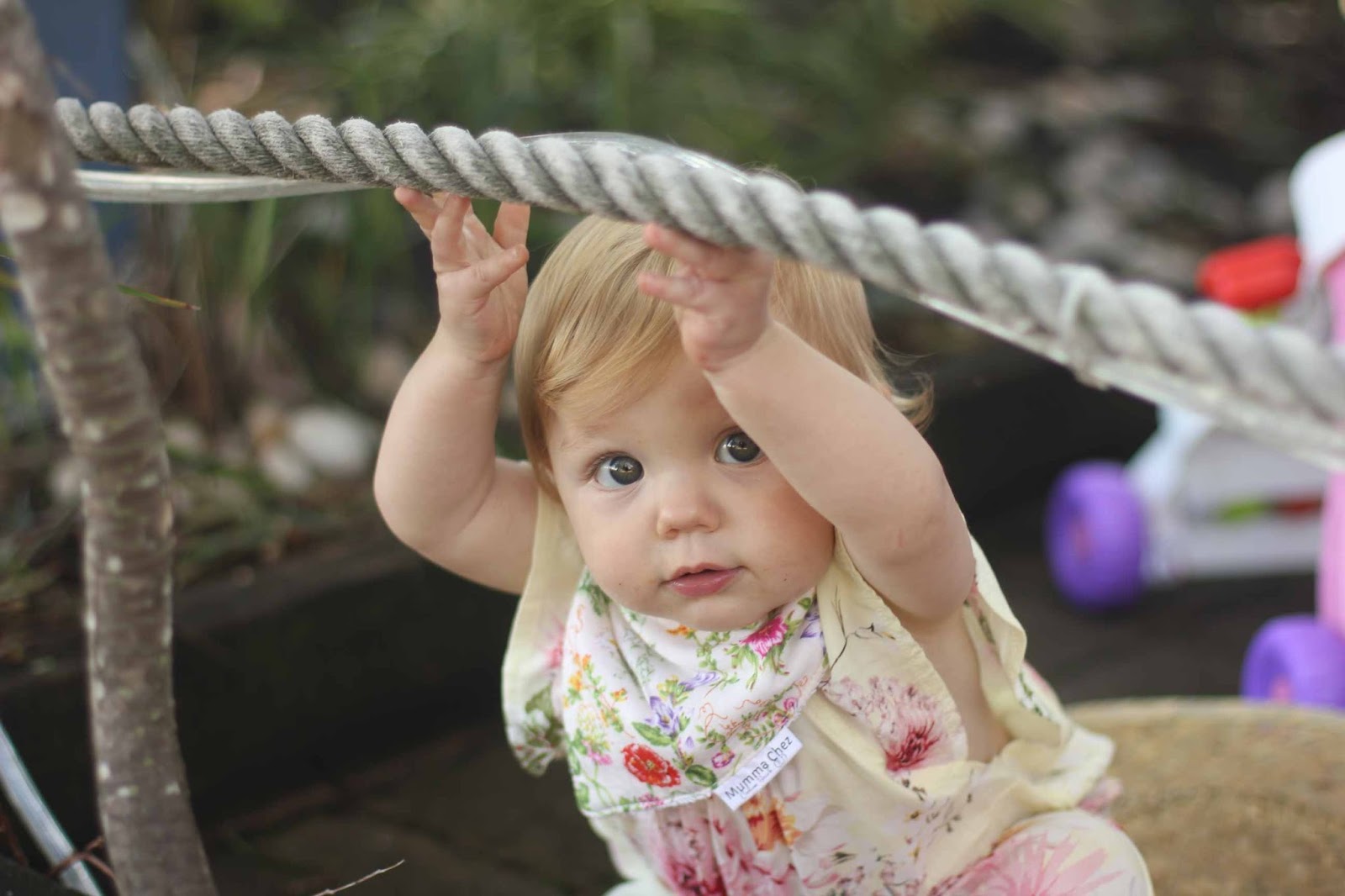 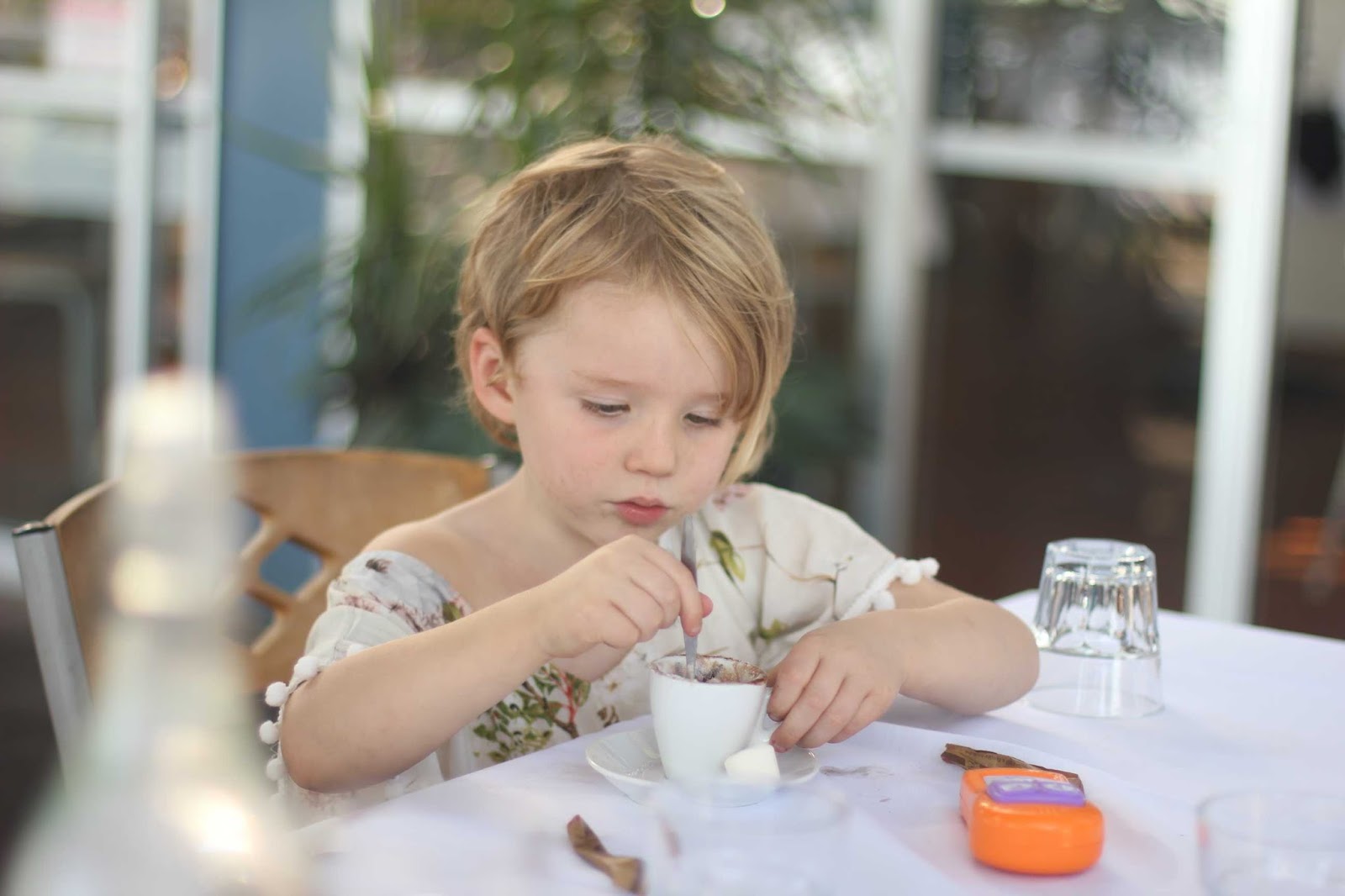 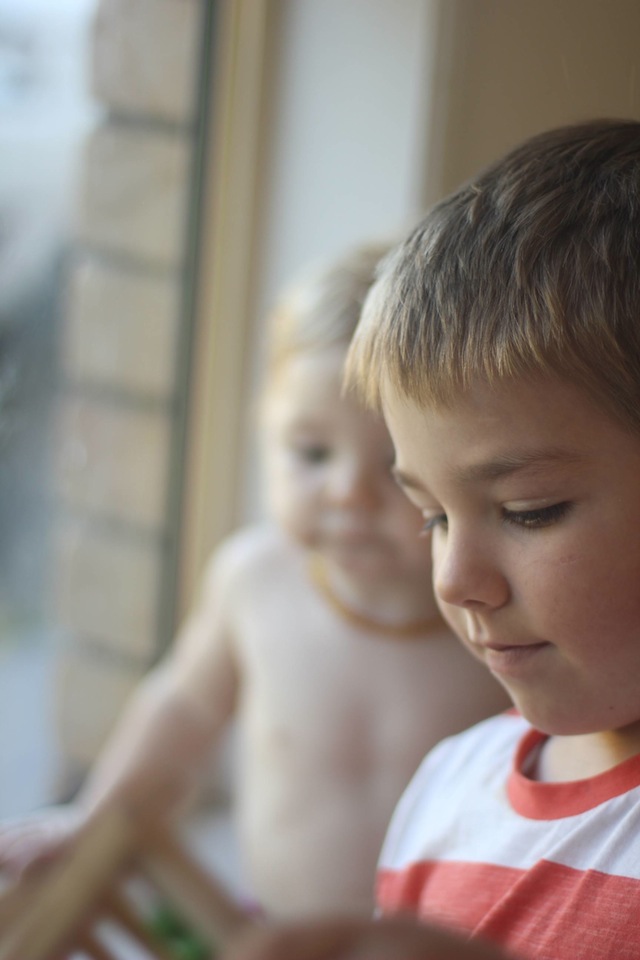 Giggle-Bear - Littlest turned one this week. My cheeky, stubborn, bundle of delight and urgent growls. In the midst of moving we forbore a traditional party and went out to an extended family lunch at a favourite restaurant by the shore on Bribie Island. A perfect day - after horrific flooding the day dawned to a high, clear blue sky and everything looking all washed clean and sparkling.

The Extravaganza - enjoying her baby-cinno. Gotta tell you kiddo 'just a hint of sugar' is not two packets worth.

We've had a hectic few weeks (thus the lack of posts). We've moved into our new house - but are yet to put in the new kitchen, so have half a kitchen - and have staggered through the school holidays while Beloved went to work and then straight to the new house to paint and cable and cable and paint and fix, caught a few hours nap and then back to work. We've had a new door put in and a wall knocked down and planted dozens of plants - tea, coffee, vanilla, pepper, mango, allspice...
We've had an attempted break and enter, a terrible flood and a bitter-sweet first birthday and now are surrounded by boxes and limited internet. (We didn't realise there's a two week gap between requesting and gaining internet...)

Deep sigh. I think I can catch my breath a little now. Maybe.

Once again joining with Jodi for a portrait once a week, every week (if sometimes a tad late) in 2015.
Posted by kirstyrosa at 1:12 AM No comments: