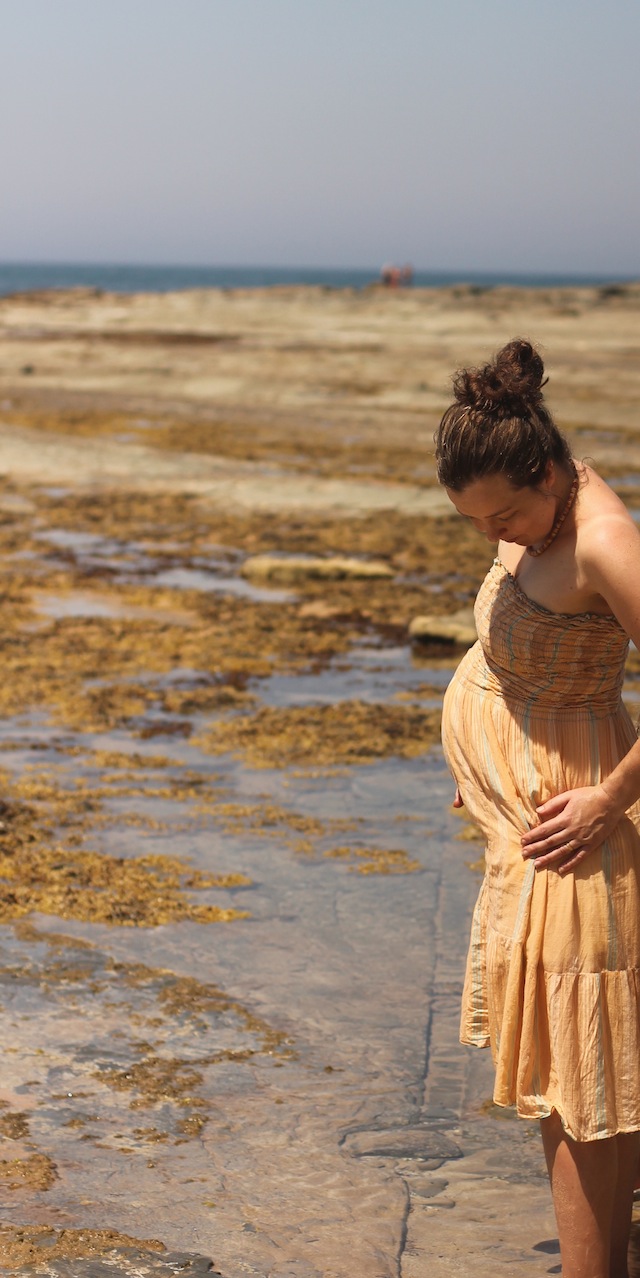 This has been a stressful week! I know that stress and smoke are both not wonderful for you, but we could avoid neither. With the fires so close to us (the evacuation line was two blocks away and there were fires all along the ‘demarcation line street’) we were all surrounded in smoke and I was somewhat stressed and sleep deprived. (Okay, I am still stressed, sleep-deprived and smoky. But I am trying to breath deeply and stay calm. Except of course, not breathing too deeply because, hey, the smoke.)

While the real threat seems gone (unless the wind picks up) the coal-mine and 4,500 hectares are still burning on the outskirts of town and smoke hangs so thickly we can hardly see the surrounding hills. Yesterday and this morning the smoke cleared (except over the coal-mine)– but since then the wind must have changed.

You, however, Littlest, are growing well.

Sitting out on the veranda on the night of the biggest fire threat, in the cool and the dark, constantly rechecking the fire alerts and road blocks on my laptop, listening to the helicopters and sirens, while my little ones slept inside -  the dog barked, and you flung out both arms and both legs in alarm. It felt like I had a bucket-load of monkeys inside! It felt like you said ‘Mummy! What was that?’

You are getting even bigger, I can feel my belly stretching and if I sit up from lying without rolling onto my side first you make the oddest circus-tent shape. I should be oiling my belly up, but somehow stretch-marks seem the last thing on my mind. Do I care? Not really. They fade to silver anyway. Your big sister is worried about my belly button ‘going the wrong way’ - it's now most definitely an 'outie'.  I’ve assured her that it’ll probably return to normal when you come out!

With the heat and the smoke outside I’ve been dumping the kids and myself in coldish baths every day to try to cool off. (I’m not entirely sure about shared baths now that your big brother is a school-boy, but on the other hand I’m not averse that he realises that this is what real woman look like, as opposed to the ones you see in the media - airbrushed, made-up and photo-shopped. Of course, most women don’t have great bulging bellies…) They’ve been asking all sort of questions about you – who made you? Why did we decide to have another baby? Why aren’t we having a little boy? Why did we decide to have any children? Why won’t you have teeth when you come out? Why won’t you be able to walk when you come out? They tend to think everything about you is hilarious. They're also keen to steal your milk but I've explained that it's "Lilttlest's milk." They both still have strong milk-memories, so I see how it's tempting when we're in the bath and it's just there!

We had a lovely day on Saturday – a trip to the beach to avoid the 40c weather at home, and enjoyed so much exploring rock-pools in the breeze, watching the small fish swim, the seaweed move with the pull of the tide, wading out to seaweed-skirted islands into the middle of channels and walking out to peer in deeper water.

Before we left I plunged into one of the clear green channels through the reef and it was such a relief to be cool and weightless and supple, to dive under and swim open eyed, to stretch and twist and hold my ankles behind my back in a basket, to float on my back between sea and water. Wading back to shore I could see the bottom of the water perfectly - the pale sand, the light shadows, the patches of seaweed, my own slow-moving feet. I’m already counting the days until we can  go again.

Last week the results of my blood test said my iron was low. The symptoms I put down to ‘baby brain’ are actually symptoms of iron deficiency – forgetfulness, dizziness, tiredness, breathlessness with the slightest exertions. Your daddy has been saying since before Christmas he thinks I’m iron deficient and I’ve responded by eating more parsley and cashews…not to mention steak… time to call in the big guns. I’ve got pills to take but I’m not supposed to take them within a couple of hours of eating and neither before or after dairy products. And… um, hello. Constantly hungry pregnant woman here. I’m always snacking. A handful of nuts here, a bowlful of cherries there, some yoghurt, and is that a rice pudding?… I’m still trying to find the right time to take the pills. Also… I put the pills somewhere very, very safe (out of reach of children… and obviously out of my memory). I’m still trying to remember where…That would be the forgetfulness!

With the continued heat your brother and sister are still in the bed with me, while your daddy sleeps on the floor or couch. I can cope with an arm from one side flung over my neck, an arm from the other flung over my chest, but I draw the line at legs flung over my hips. Your brother and sister do not seem to realise it is hot and we are all sweaty and smoky, despite frequent baths and showers. I’m also not a fan of the casual neck-in-elbow as your siblings use me as a prop to sit up. It is feeling very crowded. 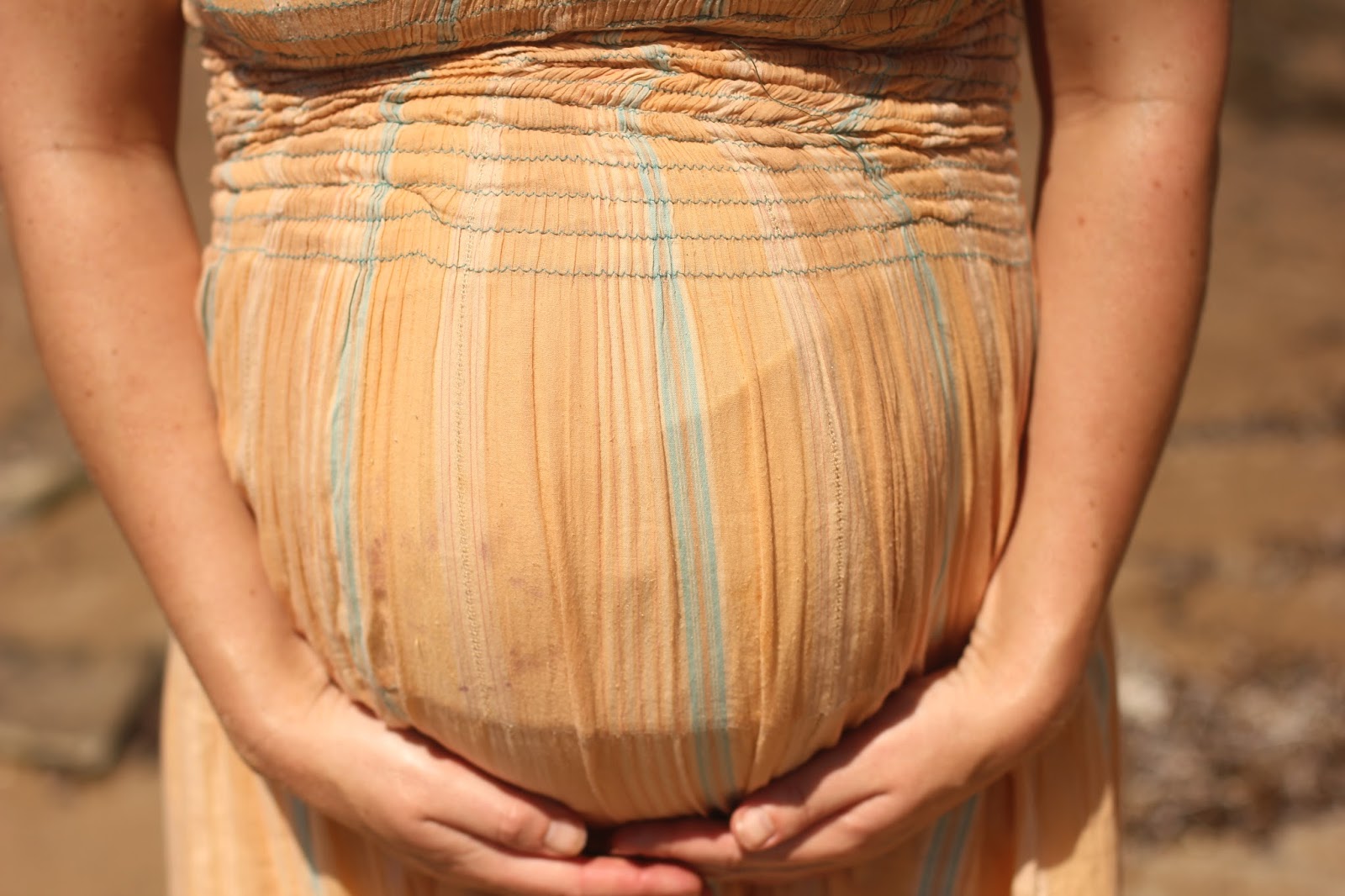 Joining with the lovely TOI of  Life of TOI and Erica of to the sea for Blogger Baby Bump.