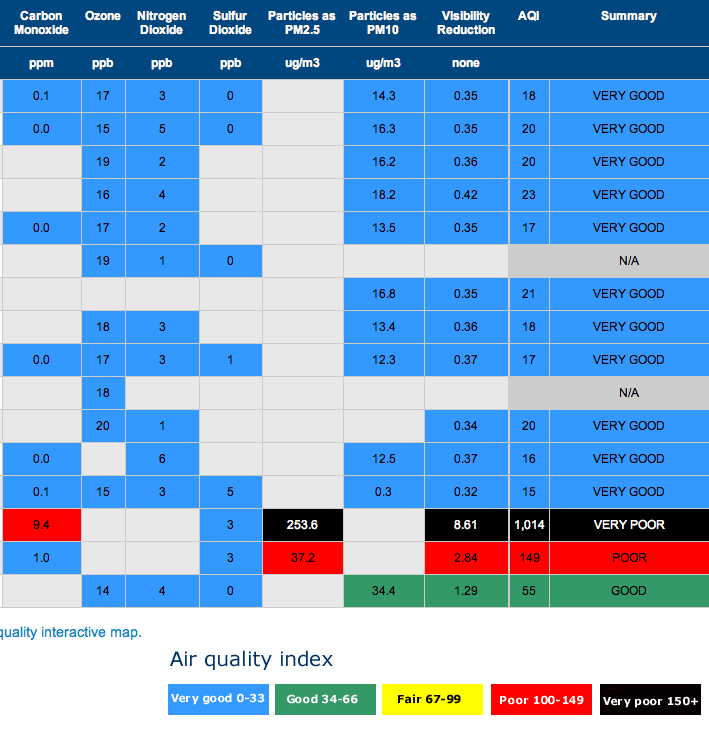 There's an old The Hollies song from the seventies that's stuck in my head at the moment.
It's 'The air that I breathe,' with the catchy rephrase 'sometimes, all I need is the air that I breathe and to love you.'
I think I probably listened to too many golden oldies radio stations growing up, but it seems very apt at present.
The air that I breathe is not something I previously considered a lot.
In fact, I completely took it for granted, although I know in the bad old days London had a smog problem and other cities around the world have massive pollution problems. (Check Beijing at the moment, which the WHO has declared 'barely suitable' for life.) It's just not something I expected to worry about in Australia. You know, land of wide open spaces and clear blue skies.
I took it for granted, like clean drinking water, again, something that people around the world have greatly differing access to, and with dirty drinking water being a major killer in majority world countries.
With the coal mine on fire on the edge of our town, the air is currently nearly ten times the 'very poor' level on the Environmental Protection Agency charts and five hundred times as bad as in Melbourne. On the chart above - we're the place in black. (This is the chart I've been checking every hour for the last two weeks. It's become almost an old friend. The places tested seem a bit random, and they only check the South and East of my town, while we're in the North West, but it's not that big a town.) You can see the Carbon Monoxide reading is also 'poor.'
Not that I'm stressed or anything.
But we've left and are living with my parents in Melbourne, with no clear idea of when we can go home. In one way it's fortuitous, as my Beloved is presently doing a rotation at a Melbourne hospital, and it cuts his commute time by at least two thirds. No more four am alarms. Yay!  However, my Sprocket just started primary school and we've had to take him out.
We did try to go back for a couple of days, as the air reading last week was generally good, wind dependant - but on Sprocket's first day back at school I was picking him up from the neighbouring town where his school is, happily telling myself that our town might suck, but at least the kids were away from it at school and creche, when we passed a heap of emergency vehicles. As we hurried in the door of home (hardly able to breath for the smoke) my Beloved rang to check we were okay - there was a grass fire heading from the mine to the power-plant and the town with Sprocket's school and Poppet's creche, and the town had a 'leave now' warning from the CFA. He wanted to check we were safely home. The 'leave now' advice only lasted about forty-five minutes before they got the fire under control - metres from the power-plant, but now that town has 'severe smoke' advice as well. The thought of being on the other side of a fire from my little ones sealed the deal.
No one really knows when the fires will be put out.
Next week has a forecast of winds and high temperatures and while two weeks is the optimistic forecast the word 'months' is being thrown around.
There are coal fires around the world that have been alight thousands of years, including one in Australia at Mount Wingen in New South Wales that's believed to have been burning for six thousand years. There are mines that are known to have been burning since 1802.
I've always been a big supporter of wind, solar and water energy, but I think I've just been radicalised.
Watching ash and soot collect in our house under air vents, keeping away from closed windows as the scent of the acrid smoke gets in the cracks, waking unable to breath properly in the night, putting out the rubbish wearing a face mask, trying futilely to get the kids to understand they just can't go outside, it's dangerous, and watching them climb the walls of our tiny house with cabin fever, planning to get away from it all and go to the beach… only to realise it's a high fire danger day and the road to the beach is in a high danger area, and decide not to… only to be vindicated when fires do break out along that road… these are things I am happy to leave behind us.
We're enjoying Melbourne and quality time with Nana and Grandpa. But I feel for the people who just can't leave, for the businesses that are going under, for the households which are much closer to the mine than we are, to all the brave people fighting the fire under horrible conditions.
So now we're just waiting, and waiting… waiting for the winds to change and the rain to come… it's a bit like being stuck in the Dr Seuss book with 'the waiting place'.
Hopefully one day soonish we can go home. For now we'll just enjoy the bright lights and clean air of the city.
Posted by kirstyrosa at 4:50 AM