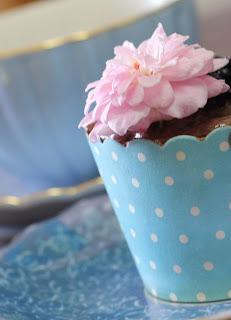 I very nearly used an actual recipe book for the first time in memory today. But then I realised we didn't  have eggs, so I ended up on the internet as usual. Eggless pancakes, hello!
Nearly all my favourite but-not-quite-remembered recipes are now bookmarked on my computer, and I've found I'm increasingly cooking by blog.
Tried and tested recipes include this truly divine Honey and Lavender cake I swooned over at This Brown Wren. How can you possibly go wrong with a recipe involving honey, lavender, lemon zest and cinnamon? Not to mention a decadent caramelling process. I've already made it once and will be making it again for my mum's birthday and then my Poppets. Chocolate delights always go down well with the kiddies and this gorgeous Choc-Orange Pudding recipe from Happiness Stuff and Nonsense - just like the one my mum made when I was a kid, but with orange, has been used ridiculous amounts of times.
Sticky Date Pudding? Yes, I have it on my bookmarks bar, courtesy of Slightly Organised Chaos. (Sweet tooth, moi? Never!) And what would the world be without brownies? Far less sweet and sticky, that's what. The only problem is getting the kids to leave enough mixture to bake.
On a savoury note, our favourite un-sugary recipe is far and away this one for Thai Green Curry from the BBC site, which has a link to making your own curry paste. The smells of lemongrass, ginger and coriander never fail to make me slightly heady. And hey, anything with coconut milk is an automatic win.
Already bookmarked for future use are another recipe from the BBC, this time for Oat Cakes and this gorgeous recipe for Chocolate Olive Oil Cake, which looks beautiful and seems to be gluten and lactose free (major win!) much thanks to Seana Smith and Nigella Lawson! (What, a chocolate-y theme? Merely research for a book I'm aiming to write next year - Death By Chocolate - working title. Although of course, dragons, an arrogant-magician-in-disguise and scheming relatives of a long-lost-dad share top billings with the lashings of luscious Chocolate! NOT an addiction. Honest!)

How about you? Do you still use real, solid tactile recipe books, or is the internet your friend?
Posted by kirstyrosa at 1:38 AM

Email ThisBlogThis!Share to TwitterShare to FacebookShare to Pinterest
Labels: Chocolate, Cooking, Cooking by Blog, no really, Not a choco-holic