Kingdoms of the Seventh Pool

You know when you dig out an old pair of jeans or a dress from a suitcase at the back of the shed or attic and you go hmmm - should I give these another whirl? They're a bit faded and don't quite fit at the waist, but maybe with some dye and a belt they'd do?
I'm sort of doing the same here.
Kingdoms of the Seventh Pool was my first published book. I wrote it when I was fifteen and it was published when I was 20. If I could re-do things, I would have edited it one helluva lot more. Now it's pretty much disappeared from the world I'm wondering whether to let it lie or put it up on the Net. The good thing about putting it up on the Net would be I'd get to edit the *$%## out of it and get it more into the shape of what it could be. The bad thing... well re-typing the whole thing out again as the only versions I can find are from very early on its life.
Rather than double thinking it all, I've just grabbed the nearest copy and let loose. 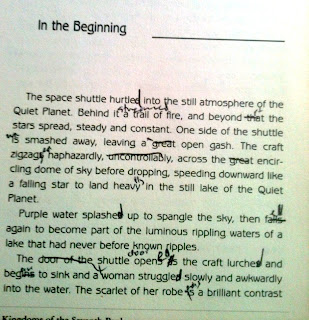 This is what the first page looked like after editing...


But below is the new and improved prologue... I'm open to suggestions!

Kingdoms of the Seventh Pool

Prologue
In the Beginning

The space shuttle hurtled into the still atmosphere of the Quiet Planet. Behind it streamed a trail of fire and beyond it the stars spread, steady and constant. One side of the shuttle was smashed away, leaving an open gash. The craft zigzagged haphazardly across the encircling dome of sky before speeding downward like a falling star to land heavily in the still lake of the Quiet planet.
Purple water splashed up then fell again to rejoin the rippling waters of a lake that had never before known ripples.
As the craft lurched and began to sink the door of the shuttle opened and a woman struggled awkwardly into the water. The scarlet of her robes was a startling contrast to the purple of the Quiet Planet. Her young face was wan and wracked with pain.
The woman looked around her, a quick, desperate glance. Eleven tall and white robed Quiet Ladies stood along the purple shore and looked back at her expressionlessly.
The woman turned back to the shuttle and reached up to clasp the young child standing in the doorway. She staggered under the child's weight although he was only small.  The boy twisted his head to stare at the women on the shore, but then turned back to his mother, hiding his face against her shoulder, scared of their unmoving gaze.
"Lali, let's not stop here," he said, his voice small.
"Heart's light, we have no choice," his mother said.
"Why don't we have a choice?" he asked. His voice had acquired the whine of the questioning child who's questions are not answered. Perhaps if his mother snapped 'because' as adults normally did, everything would be alright and their lives would return to normal.
But his mother didn't snap 'because'.
"There's nowhere else to go. I don't have the strength," she said. Her voice was low and fearful as she carried him to the shallows. As she waded out of the water the Quiet Ladies stepped forward.
"Why have you come here?" their spokeswoman asked.
"Our planet was invaded by the Vathing, our people massacred. I was in an infirmary satellite at the time, my child with me, and we escaped. I need the machines of the infirmary to keep my heart beating. I won't live much longer. I ask you to look after my child, please, care for my boy." She stroked her boy's dark head as she spoke, in the hope he would not hear her words, but even as she finished he was crying.
"Lali! Lali, don't say that! Don't say that!" he screamed.
"Heart's light, heart's delight, his mother murmured, still stroking his hair and repeating the words again and again.
"Lali, Lali, don't lie to me! Don't lie to me!" he screamed, his arms tightening around her neck. "Don't say that! Why did you say that?"
Cool hands reached out to take him from the feverish warmth of his mother. Long, pale hair swung in his face and white robes surrounded him. His mother was hidden from him.
"Heart's delight, heart's light, heart's delight, heart's light."
The murmuring, constant as his own heart beat continued insistently through the boy's screams. It was only when he could no longer hear his mother's voice that he stopped screaming to listen. But by then it was too late, his mother was gone.

Email ThisBlogThis!Share to TwitterShare to FacebookShare to Pinterest
Labels: editing, Kingdoms of the Seventh Pool, way back when, Writing