O my Sprocket and O my Poppet,
You are beginning to squabble over who gets to hold our dog's lead. (Which is not happening as she may pull you over and then pounce upon a random small creature, say a cat or a toy poodle).
Poppet, you follow our dog around going 'Sizz-eee', 'Sizzy', 'Sizz-ee', feeding her your cake and trying to put sunscreen (or yogurt) on her. You give her big hugs and affectionate pats and kisses and open your mouth wide so that she can kiss you in return.
My Sprocket, you run with her and involve her in your (wilder) games.
So here is the story of the dog of your early childhood...
Long, long ago, when your Daddy and I were first going out (and Daddy was still on his bestish behaviour - I know, I can't believe it either!) we were living on a tropical island called Guadalcanal.
One day I had to go to another island called Isabel for work, so I hopped on a little plane with my workmate.
On the island of Isabel I was checking out the condition of some of the libraries, which were mostly very sad.

(Sad school library on Isabel, tucked into a corner of the Canteen)


One day when I had finished checking out the libraries, (which had meant going up and down the coast in a motorboat - funfun) I went for a walk along the shore and saw some children throwing something into the sea.
Walking closer I saw that what they were throwing was a tiny, gingery puppy.
The kids threw the puppy into the sea, the puppy swam back to shore and then the children threw it back into the water.
I asked the kids what they were doing and they explained that there were too many dogs and they kept everyone up at night by barking.
I sighed - O poor puppy. And picked the puppy up and dried it off and set it down.
My workmate said that the kids would just drown the puppy as soon as I left. And that I should take the puppy home, poor  sad little thing that it was. I wondered how to get it on the airplane but my workmate said 'No worries, everything goes on the plane, chickens, pigs, what is one small puppy?'
I tried being very hard-hearted because even if I brought the dog back to Guadalcanal I would still need to get it home to Australia.
But... the little puppy was so small and defenceless.
So... I phoned your daddy and we talked. And he left it up to me. 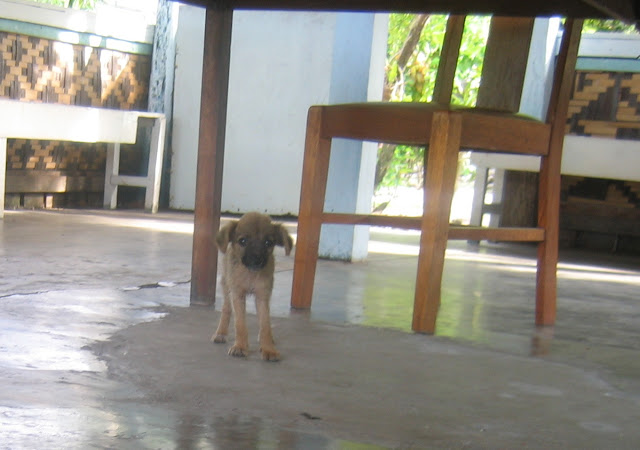 And I thought. And thought, and then just as the canoe was leaving to take us all to the airport I popped the puppy in my handbag to bring her home. (I put a t-shirt under the puppy to prevent leakages.) 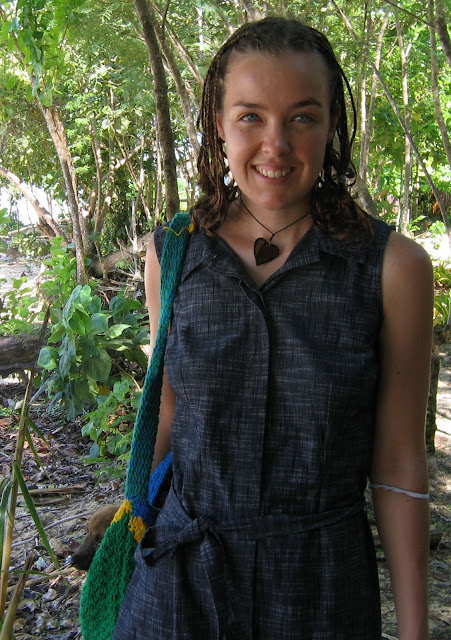 (You can just see the puppy's nose poking out of Mummy's bag. This was the airport. The beach was the runway.)

And I took the puppy home with me and many unkind people said that it was the ugliest puppy they had ever seen. But I loved her and she was very friendly and loved everybody. And cried mournfully whenever she was left alone.
And the puppy grew and grew and had many adventures 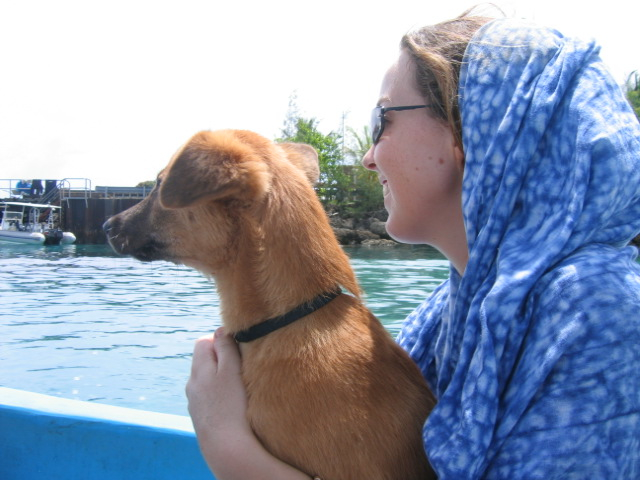 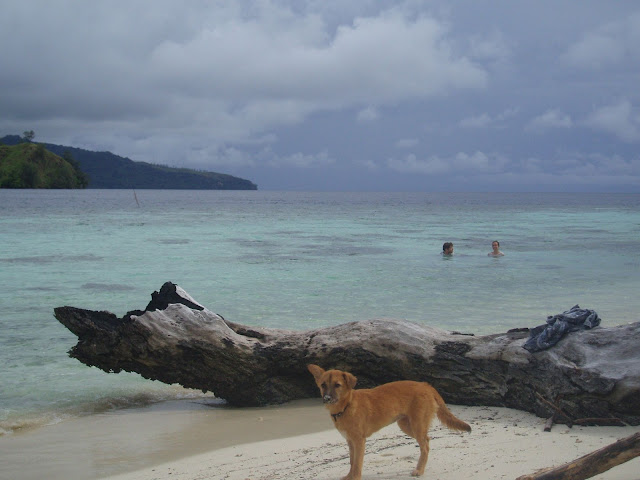 And we called her Isabel, after the island she came from. Issy for short. Or Sizzy as you say it, my Poppet.
Later she got some problems. The vet who de-sexed her was incompetent and she got a giant cyst that needed to be cut out. Two months in quarantine at a young age was not the best for her. She got mange and had to wear a coat for awhile. My old dog taught her many, many bad habits.
But she is still the same affectionate puppy who really does like most people. (With the exception of post-people on motorbikes... and other people on bikes or scooters or skateboards or wheelchairs. Sigh)
And she walked the shore with your Daddy and I when you were heavy within me, my Sprocket, and sniffed you the day you came home from the hospital and gave you a little lick. She was in the photos at our wedding. And she is with us now, in our first little house.
So that's the story of 'Sizzee' kids, the dog of your early childhood.

Posted by kirstyrosa at 5:05 PM