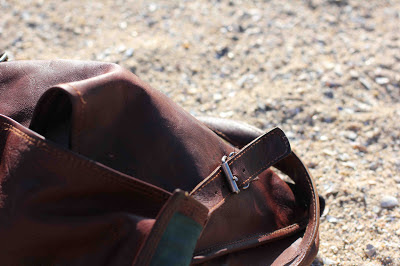 I kill my bags frequently and in diverse ways.
Some are done-to-death by forgotten banana. Some have been scribbled on by children, some just wear out, one died from leaking sunscreen, most die the Horrible Death of the Leaking Pen. Occasionally, for variety, I leave them on a bus, or kill them with a forgotten apple core rather than a squashed banana. A backpack got peed on by cats, then had its death-knell with the over-industrious application of disinfectant.
I love looking at photos of the contents of other peoples bags but they tend to leave me shaking my head, sure they inhabit a different planet. Where are the handfuls of sand at the bottom? The crumpled receipts? The apple-cores to be composted on return home, the crumpled hankies, the random stuffs...
Most of my bags have come from op-shops, so I haven't felt too bad about throwing them out after they cark it, but this year I decided it was time to be an adult and take responsibility for my belongings. This year, after last years bag died the Horrible Death of the Leaking Pen, I was going to get a new bag and... novel thought... look after it.
For my birthday my Mum ordered a handmade, fair-trade bag from India which arrived promptly and I immediately loved it. (No, not a sponsored post, I just like them!) So far, despite some near misses (the usual suspects: sunscreen, apples, leaking water bottles) it's survived.
But you know, I really want it to survive in the long term. For a matter of years rather than months.
Maybe it's time to look for proper grown up things... like pencil cases and sunscreen bags, and not randomly throw in apple cores and forget about them. Maybe it's time to start putting my car-keys in an allotted bit and my phone in the allotted bit. (In which case I might actually know where my phone was...)
But can a massively disorganised person become an organised person. Can I train myself to actually think about what I'm doing with stuff, rather than the story I'm writing in my head?

Are you a bag killer?
Or have any tips on not being a bag killer?
I love my bag. I don't want to kill her... (Although I suspect I might be able to take her to the cobbler and get her patched...)

Posted by kirstyrosa at 9:15 PM