Countdown to Camp...and Battling the Beast 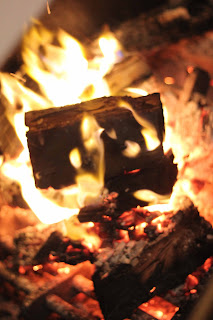 So Camp Nano begins in 3 days, 23 hours and 50 minutes.
In 3 days, 23 hours and 50 minutes I set out to write 60,000 words in a month. Again.
It's not like I haven't done it before. This will be my third NaNo. It's just this time... this time I'm apprehensive. Doubtful.
We have firewood waiting for atmospheric warmth and comradely campside cheer. Marshmallows are on the shopping list. My beloved has promised to gut an old and dead computer to retrieve the half of my music which has been missing since 2010 for the necessary sound track. And I cannot begin to tell you how eagerly I am looking forward to hearing all my favourites again.
But...
This will be my largest, weightiest novel yet, of epic proportions. And it involves real research. Gulp. I  avoid real research* in most of my books by setting them in imaginary worlds, largely as I get so annoyed by others historical inaccuracies.
This one has a large chunk set in an Irish Myth-time that I would prefer not to be too humiliatingly ridiculously wrong. Making the setting myth-time, rather than straight pre-history, gives me a fair amount of lee way. (At least that's my story and I'm sticking with it.) The character I'm centring my novel around has dramatically different biographies and faces in different countries. The Welsh version is completely different to the Irish, and the Cornish again is vastly at odds with both the Irish and the Welsh. I haven't read the French (if it still exists,) but I'm plumping for different yet again. There's a lot of room to play. But still. I might put a book or two on hold at the library. Or ten. Or twenty.
3 days and 23 hours and I'm still deciding if there will be three parts or two, three points of view, or one...
The plot is easy. I know what happens. I know the timespan is 16 years give or take. It begins with a birth and ends with a death. I know my characters. I can see everything unfolding, like a movie within my head, and snippets of conversation are keeping me company. It's the telling that's worrying me. Cue lip gnaw.
I have easier, frothier, less troublesome stories all set to go.
Three at least are clamouring. Three novels I can easily role out the first draft of in a delightful, unproblematic month. If I go with The Beast I accept the first draft probably won't be completely finished for at least eighteen months. 60,000 words for The Beast will be a skeleton with half the bones missing.
But... that seems cowardly.
So I'm preparing to Battle with the Beast.
Wish me luck.

*This does not mean that I do not read dozens and dozens of books in research, just that I don't actually need to use any of the facts gleaned, and they probably should come under the heading 'beloved procrastination.'
Posted by kirstyrosa at 12:54 AM