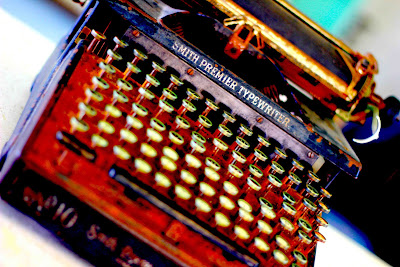 Today's the day and has been for the last eight hours and thirty three minutes, not that I'm getting worried or anything.
National Novel Writing Month (nanowrimo) has officially commenced.
To be honest, it seems more logical that it be World Novel Writing Month, as it's truly a global event, with hundreds of thousands of contestants from all around the world competing against themselves and the temptations of Pinterest to complete 50,000 words (that form at least a vaguely coherent novel or part thereof) by the end of the month.
Let's be clear, for thrill, daring, odds against, the Olympics has nothing against us.
Watch our fingers fly.
Our coffees (and possibly hair as it's yanked out in frustration) disappear.
I made the trek from the wilderness to the Big Smoke last night for the Melbourne Region kick off (much thanks, Mum & Dad for babysitting!) affair at a cafe-bar in the CBD and it was truly a buzz to be around so many people preparing to start their vastly differing manuscripts. Hopefully I'll hear what's happened at the end of the month and we'll be trading stories about the completion of our 50,000 words.
Wish us luck!

Posted by kirstyrosa at 2:58 PM