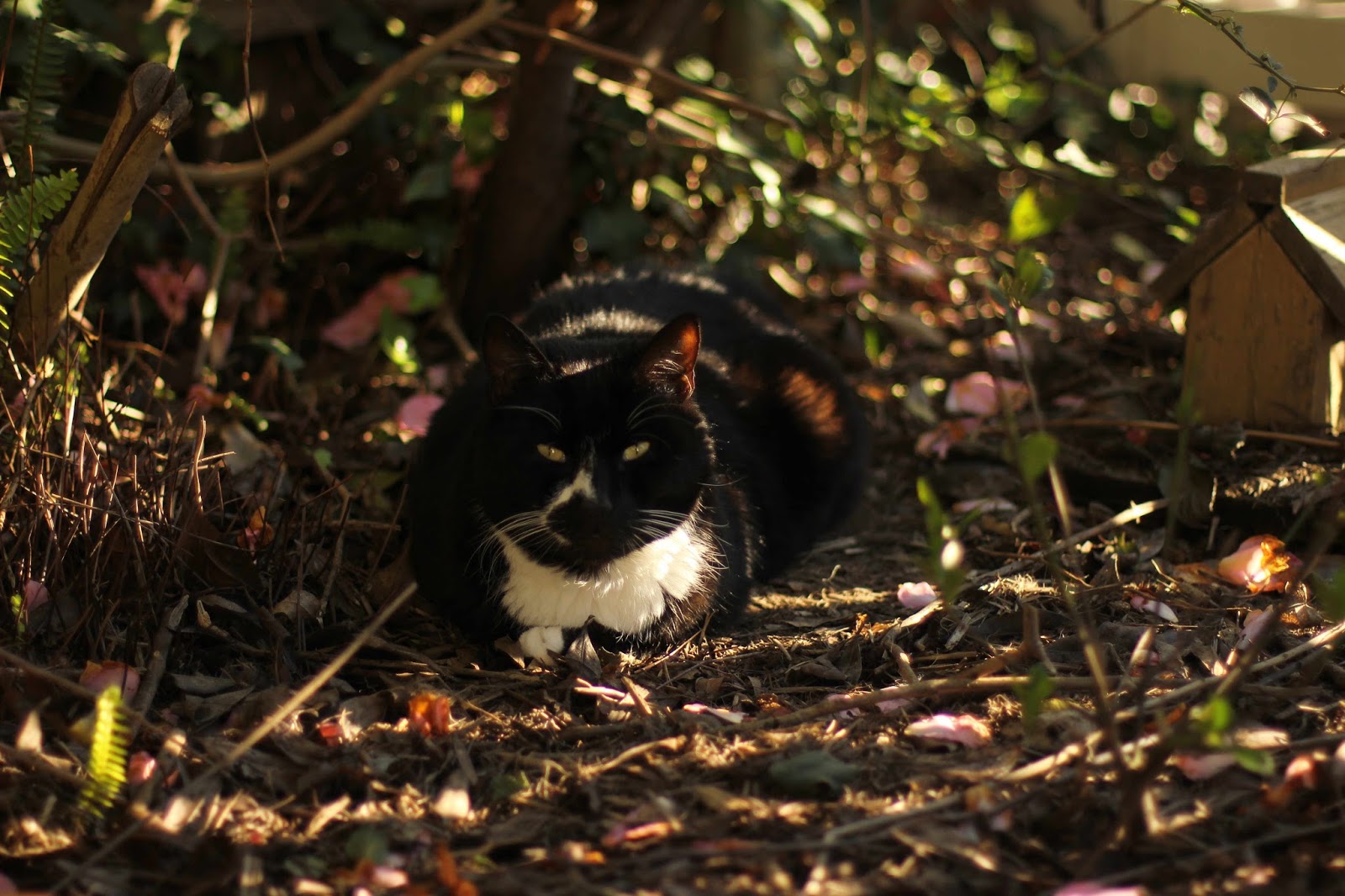 I think I let the alliteration run away on me with the title, but I couldn't resist it.

We had a cat adopt us recently. A tough, in-your-face and under-your-feet and on-your-kitchen-benches type of cat.

The first warning that a life with cats was about to descend occurred on the morning I was in labour with Littlest. As I pottered through the house in the pre-dawn, electric with excitement and promise, I heard a mewling outside the kitchen window.

Eventually deciding the plaintive noise was a cat, I went outside and put out a tin of tuna. Eventually, a shy tabby appeared, ate and quickly fled.

That wasn't the cat that adopted us.

My first memories of the cat that adopted us are of driving up the drive with my newborn, and a big black cat trying to leap into the car as I unbuckled my baby, and then trying to trip me up as I carried my little one into the house.

The cat is large, and black, with a white bib and a splash of white across it's nose. We still haven't worked out the gender.

My Sprocket adores it. It is probably the only cat in the world tough enough (or desperate enough) to put up with his rough-love. The first thing he does every morning when he wakes is stagger to the front door to let the cat in. (Although it is often already sitting on his daddy's lap in the back room as his daddy studies.)

My introduction to the cat did not improve. Cleaning up diarrhoea it spread through the kitchen, up the hall into the living room and onto the couch did not endear me to it. Especially when half-way through the cleaning process my Sprocket brought me my crying two week old. My hands full of clean-up stuff there wasn't a lot I could do but ask him to put Littlest back. Now. Carefully.

Then there were the scratches and bites on my Poppet's face. Despite the scratches my Poppet doesn't learn. I think she's too used to the Sprocket's rough ways. Despite her face being a mess of red lines she keeps carting the cat around. And any cat would scratch considering the treatment. But a sensible cat would vamoose until the kids were old enough to understand the concept 'gentle hands.' We do keep explaining cats need to be held gently. And the best way to hold a cat is to sit still until they come to you. And you need to hold them this way. Not like that.

But no. The cat stayed. To be lavished with not-so-gentle-attention and scratch my little girl. She still has a tooth mark on her forehead, as well as the multitude of scratches. But hers is a forgiving nature. Although she comes to me crying one minute, the next all is forgotten.

We eventually worked out that the Black Beastie (or Kik-Kak as my sprocket named it. No. Not Kit-Kat, Kik-Kak) belongs to a guy across the road we think is a truck driver as the man is gone half the week and was once seen in the cab of a truck. At first we thought Kik-Kak belonged to a neighbour as we heard him kicking Kik-Kak out of his house and thought him very cruel.

Until it was our kitchen Kik-Cak was invading and our thighs Kik-Cak was leaping up on as he tried to roll us for our carrot stick. (No joke.)

Visitors love Kik-Cak. They forgive his piratical look as he immediately jumps in their lap, settles in and begins to purr. My children are obsessed.

He reminds my beloved of a particularly ill tempered cat he grew up with, chosen as a kitten as he was the one with his paws covering all the food and hissing at the other kittens.

I feel like a scrooge as I demand That Cat be kept away from Littlest. Maybe I'm just too busy at present to make room in my affections for another demanding little one?

Because the thing is, I am not usually anti-cat. In fact, I once brought home a cat from Tonga at vast expense and inconvenience, because he was irresistible. I was given Rosie as a kitten and for the first three nights he hissed and spat, and the third night he hoped up on my bed and slept the night under my chin and purred. Rosie was beautiful. Don't ask about the name.

Or Su-Su. Su-su was the daintiest, most beautiful cat to walk this earth. She had one luminous green eye and one luminous blue eye and gentle white paws and the most exquisite manners and grace.

Pussy, a big orange tom who turned up in our garden when I was a kid in the inner city and Ella Lucy Tiger Flower, a little black and white cat with a splash of ginger who turned up in our house when we moved to the outer suburbs, were both cats of personality and manners.

Lion, my parents cat, is a ginger cat of sense, who flees the house as soon as my kids arrive and returns the moment the kids are out the door.

In a children's story I love called The Singing Tree by Kate Seredy, written about two children in Hungary during the first world war, there is a story about a cat.

The children are sent to fetch their grandparents who are too close to the line of fire and at their grandparents house, amidst the devastation and the sound of fighting, the girl sees a stray cat and takes it in. The grandmother complains that it is no time to be thinking about a cat but the girl hides it away. On the trip back the cat becomes sick and the girl insists on taking it to a military hospital and having it seen by a doctor… which is where the long lost dad of the boy is found and retrieved from his amnesia by the little girl's famed scream at seeing him. (I'm not saying it's a particularly credible story, but as a kid it always made me cry.) The cat proceeds to have kittens, all of which are in high demand by kids wanting their own daddies found.

And every so often I think I really should find room in my heart for this most demanding, in-your-face- cat. Particularly as s/he appears disabled - being, by all appearances, unable to smell. (What kind of cat sticks their claws into your thigh for an apple? Or a carrot stick. And throwing it a scrap of chicken it chased the direction of the movement, but a foot from the chicken couldn't smell it.)

Is it ones duty to love cats that just turn up? I'm still working on it. Maybe when life is not such a hurry of school runs and nappies and children suffering melt-downs with middle-child-syndrome.

Maybe. In the meantime the cat is well fed (my beloved), well loved (the kids.) And I content myself with fleaing and worming it, and wondering about the ethics of taking someone else's cat to the vet. Just to check it's not with kitten. 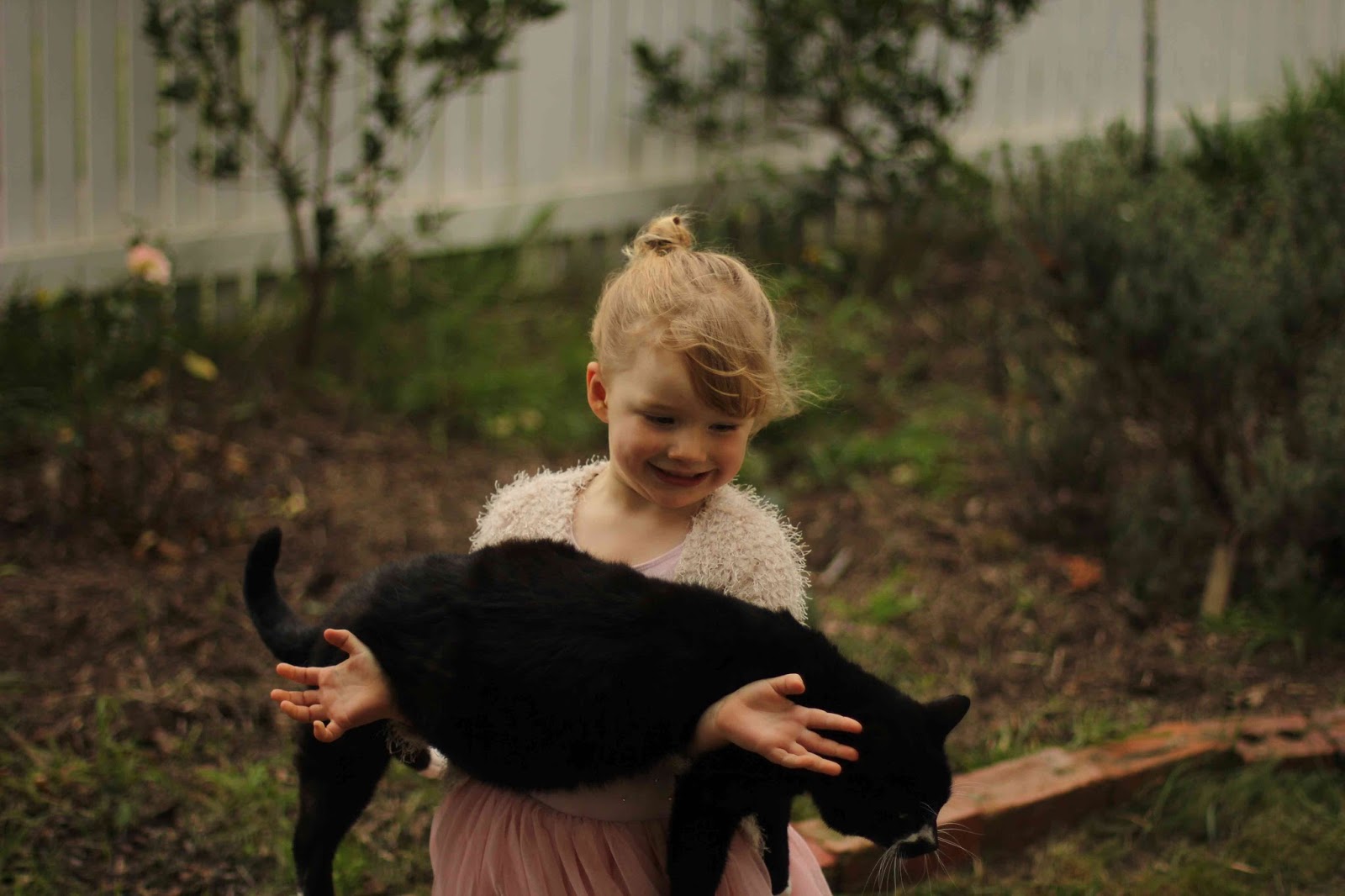 Posted by kirstyrosa at 1:07 PM