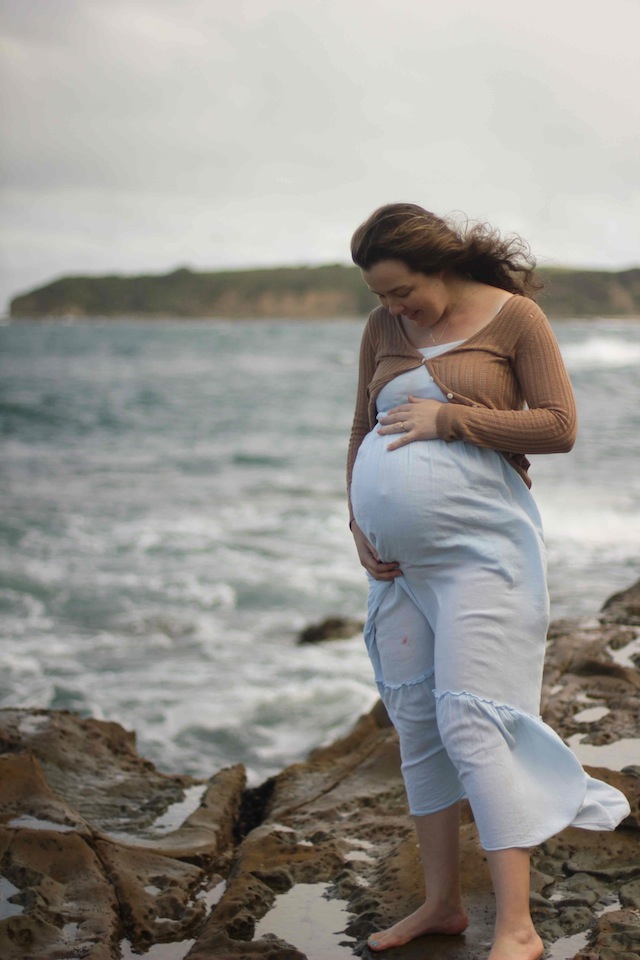 At the beach at Inverloch. Wearing - a dress so old I don't remember where I got it, but it's pre-Sprocket and my 'go to' cardi that I wear with everything. Sadly, it is dying, so I'm scouring the op-shops for a replacement.

O you clever little one! You listened to us and turned, just in time!
I walked home from the doctors after having a booster vaccination, enjoying the cool, the light drizzle, the scent of the rain, and your Daddy came to meet me in the car. The midwives had phoned to say the obstetrician wanted to see me that day, not next week, which is when my next appointment had been made.
We both knew that it was almost definite that he wanted to book the date for a caesarean, and while we were excited to be getting a definite date for your arrival, I was also not a little worried about undergoing major surgery and the long recovery period - especially while running after your big brother and sister.
Ironically, when I was having your big brother, before he started his med-degree, your Daddy was all for the 'safe, scientific' way of childbirth, while I was insistent that if possible, natural was better.
After he started his med-degree, and particularly after witnessing a few surgeries and particularly caesareans, your Daddy did an about turn. The word 'brutal' was mentioned. And this is even considering he's still got a not inconsiderable amount of PTSD from your big brothers protracted birth when he thought he'd lost us both.
Anyway, we arrived at the clinic, the obstetrician squeezed us in during his lunch break (remembering your Daddy from his rotation last year) talked about the safest option being a caesarean, a decision we'd already reached, and then told me to pop up on the bed for a quick palpation and ultrasound.
And voila! You'd turned! Your little head is now where it should be, bouncing around on my cervix, and your little backside is up by my ribs.
Considering only eight percent of babies turn at this late date, and I was deep into not-worrying about whether you being breech meant that you might be in distress (a reason the studies suggest that breech babies have a higher mortality and disability rate - not the birth method itself, but that the breech is an indicator of something wrong pre-birth) I am excessively grateful.
For the record, your daddy and I were both late turning breeches. So if you decide to have kids and one is breech - remember late turning is in the family!
Your Nana lit a candle for you in church on Sunday, and I have been giving you pep-talks and swimming at least every second day, and while I don't know if any of these influenced your turning (and I'm not about to suggest a Cochrane meta-analysis be done on any of these methods for turning) or whether you just decided it was time - we're very happy. Well done little one!
While I'm incredibly grateful that a caesarean is a (life saving) option in case of difficult births, I'm also very grateful to (hopefully) be avoiding one.
Autumn is well on the way now. It's been raining solidly the last day and night, a steady, comforting fall, with mild air and soft grey skies. It feels a bit like a benediction. Your Aunty Bec is here from Queensland and we drove to Leongatha today for an op-shop crawl (discovering a great new op-shop where books are still 20c and clothes a dollar) and passed the first of the Autumn trees.
Deep sigh of content.
I'm so glad you're an Autumn baby, little one, I really do think it's my favourite season. (Although I've thought that about Winter and Spring as well.)
You're officially full term now, Littlest, and while I don't really expect you for another month, we would be over-joyed to meet you any day from now.
Grow well, Littlest. We're so excited you're nearly here, and thank-you for listening.