So November and the National International Novel Writing Month is finished. My 50,000 words are sitting smugly on the computer and I'm in a writing lull, catching my breath and blinking alot.
Christmas is here, the holidays are here, we're busy not-getting-done-the-long-to-do-list I write each year for my Beloved's university holidays and I'm staring around rather blankly wondering what next. Of course there's the to-do list, but my Beloved and I are rather at odds about the-to-do-list. And I can see his point.
After the madness that was November we're both in collapse mode and only just rising from (figuratively speaking) shuddering heaps on the floor.
Seriously, what was I thinking trying to do NaNo in the months of the major exams of my Beloved's med course, while we were both sick, with one car out of action, the garden looking like something from a horror movie with one shed roof and a few massive branches knocked out with the big winds recently, another shed roof collapsed after the Sprocket decided to dance upon it, and weeds taller than Poppet. And the house not much better.
Hmm. Maybe that's what I was thinking with Nano. Not thinking about it. Instead trying for something achievable. With a tangible end. And time pretending to be on top of everything in civilised cafes.
Amongst all the disasters it's comforting to know that the bones of a brand new novel are sitting waiting to be finished. Of course, the fifty-thousand completed words only turned out to be about fifteen chapters out of twenty-six. Despite three assassination attempts, actually, no, four,  a couple of life-changing revelations and a sea-journey into the past, I'm only beginning to get to the really fun bits.
I'll hopefully get the last forty-thousand words written over the next few months, put the whole thing aside for six months, ruthlessly cut ten to twenty thousand words and then put the whole thing up on the online writers site, Scribophile for critiquing. Which will take maybe another two months to earn the karma and then make the suggested changes.
Writing is a long, slow, process.
By the time the first draft of the book I've just been working on - momentarily titled Green Dragon Waking -  is finished, I hope to have completed the first fifty thousand words of the next two novels in the series. (And yes, most of my giddy spine-tingles at the moment are reserved for those stories. The New, Improved, All Kinds of Wonderful.)
But see- look - my certificate! (This years certificate was a bit disappointed, the seem to have decided upon an overly pixelated look I'm not a fan of, but hey, it's still a cute little piece of digital paper to say I did it!) 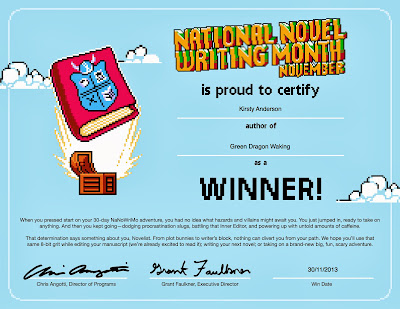 Posted by kirstyrosa at 7:32 PM