Recently, I downloaded a  new toy. Not just any old toy, but a special novel writing toy.
It's called Scrivener and it's for helping organise (well, yes) your writing.
One of the goodies I won for completing Camp NaNoWriMo was a half-price download, and as I'd been salivating over Scrivener for awhile, I decided to take the plunge.
Don't you love those first heady days of playing with a new toy when it's all sparkly and full of possibilities?
I waited a few days, psyching myself up to read the manual and watch the videos.
I got three pages into the 500+ page manual and gave up.
I started watching the videos, but realised 10 minutes in that I was more engrossed in my multi-tasking pinteresting and hadn't heard a word the guy had said, despite his pleasant, soothing voice.
I'd read a few blogs about Scrivener and the testimonials had been glowing, but scarily technical. In fact, some had been written nearly entirely in geek-speak. Uh-oh.
So I just dived in.
And it's so much fun.
The stuff I want to do, I can do. I didn't want to bother with all the tricky stuff the blogs talked about with importing and exporting. I copied and pasted (chapter by chapter) and my book all appeared on a lovely cork board looking just lovely. 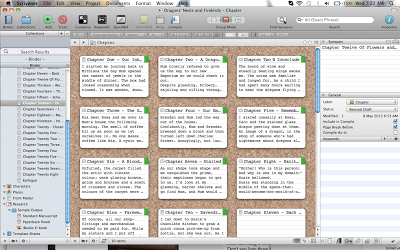 I can colour code to say whether a document is a chapter, a scene, a character sketch or whatever and I can label documents as to whether they're a first draft or a final draft. I've 'lost' what I've wanted a few times, but a bit of clicking turns it up eventually. Already I've sorted out my wonky chapter numbering and I can't wait to get the story line tightened with the chapter synopsis corkboard.
My geeky Beloved (he who did his Masters of IT while doing his Med degree) has already played with it (obviously) and says it would be great for doing research proposals. And of course scripts, non-fiction  books and a zillion other things.
I am already itching to play with my next two novels on Scrivener starting from scratch, rather than shoving in an already completed manuscript.
I. Need. Time.
Playing. With. Cool. New. Toy. Time.
Now I just need to work out how to save...

Do you still love playing with new toys?
Found any good ones recently?

(And no, this isn't a sponsored post!)
Posted by kirstyrosa at 2:36 PM