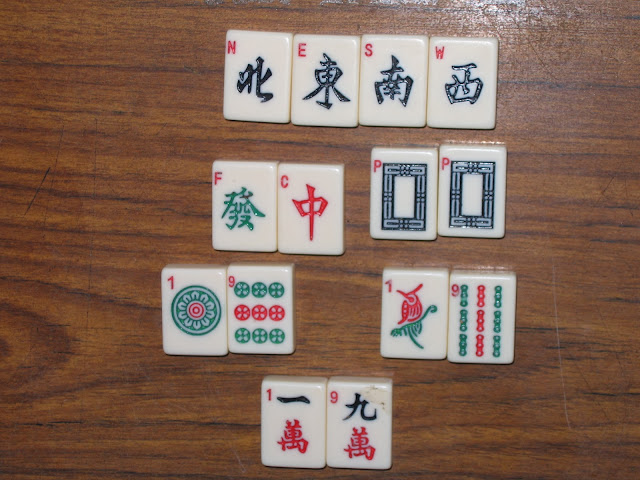 Unique Wonders - My Beloved won with this hand shortly after I taught him to play, back when we were still living in the Solomon Islands. In all my (um, thirty) years playing he's the only one who has got this hand. He was very proud.

I think most families have games they always come back to - with us, it's Mah Jong.

In the late 1940's my Great Aunt and her family went to China, where they lived for four years, only returning to Australia when the Communists took over (the boat they left on was shelled). She returned with a Mah Jong set. While my Great Grandmother also left a Mah Jong set (which was possibly older, I'm not sure) it was Great Aunt Jean's set that we played with throughout my childhood. Every time we went down to the beach house, out would come the Mah Jong.

Mah Jong is a lovely, tactile game to play. There's the gentle clack of the tiles as you shuffle, the making of the four walls, the dealing of the hand. First to east, second to south, third to west, fourth to north, and then again, and then again, then first and third to East and one each in order around the table. Tiles are sorted and flower tiles are retrieved from the Flower Wall.

The tiles are solid, cool, the suits and honours engraved in them.

I think I began playing at three or four, pretty much as soon as I could recognise numbers. I still remember the excitement of playing with the big people, the dark surrounding the small shack, the sound of the sea, the click of the tiles and the great anticipation of what the tiles would bring.

Mah Jong is very much like Gin Rummy to play. (A fact I discovered on one of the hop-on-hop-off buses going across Eastern Europe. A nice New Zealander taught me to play Gin Rummy - then stopped speaking to me when I won the first four games ...) There are three suits - bamboos, characters and circles and then the 'extras.' The aim is to get four sets of three and a pair, but then there are the fancy hands... the Unique Wonders, the Heavenly Twins, the One to Nine...

As a child I thought the pinnacle of happiness was to win with an All Green Hand. This would be a hand of two, four, six and eight bamboo, with a pung (or better a kong) of my beloved Green Dragons thrown in for good measure... and if I managed to get a bouquet or a pair of flowers ... all the better. Of course, a one-to-nine is always a lot of fun, as there's the tension of having to pick all the tiles up from your hand, rather than the board, and the dread that a tile will go 'dead' before you get it.

Most places I've gone around the world I've brought a Mah Jong set. Not a lovely old, aged bone or ivory one, but a cheap plastic one, and taught the people around me how to play.

Thus it was that shortly after we started going out my Beloved and I moved into a share house on the shoreline in Honiara, the Solomon Islands and, pretty much simultaneously, I taught him how to play Mah Jong. The house was (is) still, pretty much my dream house. It was all exposed wood and polished  boards, a tree grew through the verandah, the rambling garden was full of basil and chilli, aubergine and tropical flowers, the trees along the sea-line had hammocks to loll in and look out at the-island-that-made-me-sick and the canoes easing by, and there was a leaf house.

When we voted on what to call it, I obviously opted for Green Dragon House. Most people scoffed, but that's what we ended up calling it, Green Dragon House, White River, Solomon Islands. While poker was the main game, Mah Jong came a close second.

Now, the next book I'm writing has a Green Dragon House (indeed a River Valley resting on the top of a sleeping Green Dragon) and a magical Mah Jong set. I am looking forward to ordering the Winds and Dragons about, although of course, my first love is reserved for the Green Dragon.
I'm looking forward to describing the clack of the tiles, the building of the wall, the families coming together.

I got my Mah Jong set out recently when my sister-in-law came to visit, and taught her how to play. While my kids only showed marginal interest in the game, my Sprocket was very good at putting it away, and matching all the tiles together. (Seriously, I even like putting the tiles away - there's something about looking at a tray of Flowers, Winds and Dragons, all neatly ordered, that is intensely satisfying, and even the Characters, en masse, look very orderly. The rest of the house may be a disaster but the Mah Jong set? A thing of beauty.

Maybe not this year, but soon, hopefully next year, the kids will become the next generation to play. I can't wait.
Posted by kirstyrosa at 2:10 PM