I'm putting away the Poppet's first summer dresses. As it's July now and officially winter I doubt she’s going to get one last wear out of them. Though I might keep a couple out just in case as they are entirely adorable. All doll- size pinks and whites and bows and flowers.


But hey. I'm a girlie girl. And until the Poppet is old enough to say NO – hey, so is she.

Every time the Poppet outgrows something I swallow.I've been waiting - o at least 27 years to play dress ups with my daughter. And now that time is here it's going so fast. As much as I try to hold onto the time it just seems to slip away.

My little girl has an imperial wave now. She walks her way along the furniture. Recently come dusk Caleb was playing in the garden and I blinked and saw her little backside busily heading into the dark to find him. She claps and points out her desires and smiles beautifully for the camera. She has a good line in putting her head on peoples shoulder and smiling enchantingly. ‘Am I not adorable?’

She loves playing peek-a-boo with the Sprockets Bob the Builder hard hat. 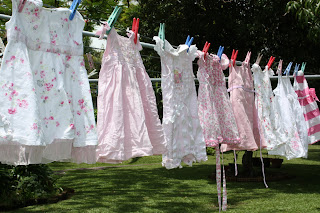 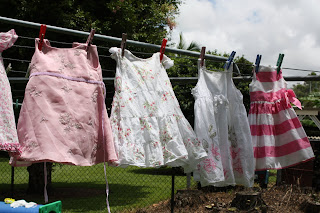 Email ThisBlogThis!Share to TwitterShare to FacebookShare to Pinterest
Labels: Goodbye Summer Dresses. Why do babies Grow up?, nostalgia, Poppet