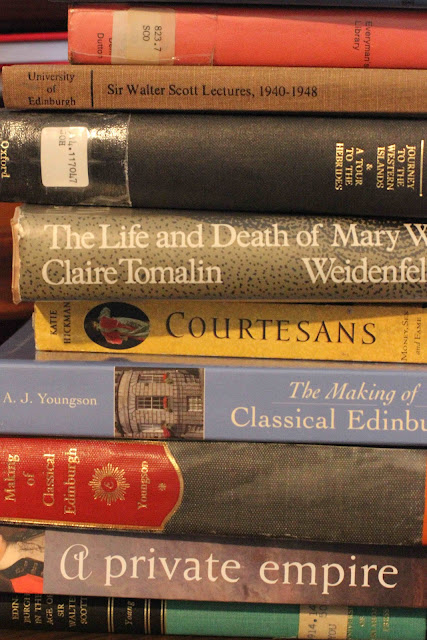 Abruptly realising my library books are due back tomorrow and I can't renew them, I'm desperately taking notes for my novel. Unfortunately, they don't count for my nanowrimo word count...
It is possible that I borrowed a few too many. But I am discovering such fascinating things!

Stuff my research has taught me:

*Terry towelling was only invented in the mid nineteenth century. Before that there was only strips of cotton. Can you imagine, no proper towels? Brrr.
*In the eighteenth and early nineteenth century an upper class woman might have a greater chance at happiness and self-determination as a courtesan than as a wife. Courtesans went into the 'protection' of men with a legal document as to their entitlements. They also seemed to have greater choice as to who they associated with. On the one hand I read about poor Miss Mcpherson who at 20 was married off to her fathers best friend, age 53, who proceeded to sue her father to hand over more money to take her of his hands. On the other hand I read the touching love story between courtesan Elizabeth Armistead and Secretary of State, Charles Fox, who ended up happily married - without money changing hands. Indeed Charles wrote to Elizabeth: "You are all to me. You can always make me happy in circumstances apparently unhappy and miserable...Indeed the whole of my life depends upon you." Of course, two cases is hardly evidence, but on the whole the state of the wife at the time did not seem enticing. I need to re-read my Austen to remind me that love and romance within marriage did exist back then (tightly bound up with property and money...)
*Suing people is no new thing. Eighteenth century Edinburgh was cram packed full of lawyers and rich people seemed to sue each other constantly, generally over money, often over wedding settlements or dowries. I would hate to think my husband needed to be paid off to marry me...
*Scotland in the late 1700s early 1800s was actually fairly multi-racial. Many Scots went to India, China, Jamaica etc, and then brought back their half-Indian, half-Chinese, half African slave childen. These travellers did not commonly seem to bring home their children's mothers however. The heartbreak of this just tears at me as I think of mothers torn from children and children from their mothers. I also can't help wondering what someone who grew up in Jamaica or India would make of Scotland in the winter!

Now I need to return to my books - I've a lot to get through before morning!

Is your book-lust bigger than your time-budget?
Do you over borrow in libraries?
Or over-buy in bookshops?

Posted by kirstyrosa at 2:55 AM