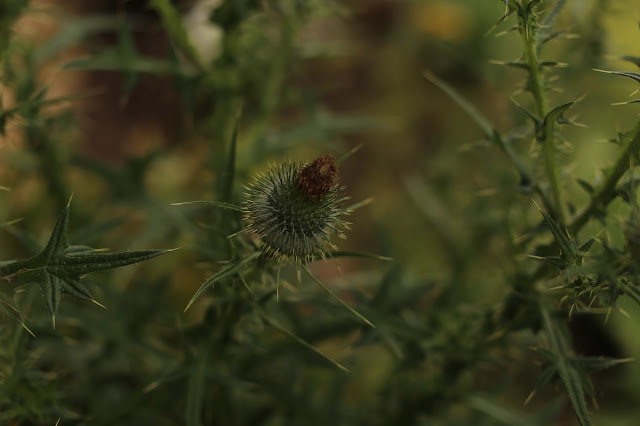 (A thistle in my garden - a great hulking thing, taller than the kids, and completely out of place amidst the coffee plants, hibiscus and bougainvillea. I've let it grow... because. It's going to seed now, so I'll cut it down soon, but I am half tempted to vase it up...)


I'm drawing breath now, a break from getting the words down. Coming up for air in this place, this time, rather than story-time, myth-time. Shaking my thoughts free of character and plot for a short time before I dive in again.

Yep. It's (Inter)National Writing a Novel Month, that time when all around the world thousands of us are trying to write fifty thousand words in a month.  If we're a bit not-quite there, a bit off-in-story-land, looking vaguely into the distance, that's the reason.

I'm hearing voices in my head, a couple of voices in particular - one being a very arrogant Irish godling with a strong Glaswegian accent. He's just about to fight in the Second Battle of Moytura.

This is my first NaNo since I had the three kids rather than two, and yes, there have been days not a lot of floor has been visible at our place. (Beloved's been working a rather brutal series of nights.)

There have been days that a lot of coffee has been a necessity because I've been up most of the night before catching up, or tracking down an elusive snippet of story or information I want to use or looking for images of a particular waterfall.

I'm on track for today - I've caught up at 30,000 words and a bit so far this month. I find if I miss a day of writing, I quickly fall behind - if I manage each day's official 1666 words it's so much easier to stay on target.

This month I'm finishing an Old Nano project - Fosterling - the first fifty thousand words were written in a previous NaNoWriMo, I tinkered and added an extra 10,000 words in the interim - and voila my book is now up around the 90,000 word mark. I enjoy it's solid bulk, although I know I'm going to decimate it.

The earlier words are also a distraction though - for every word count I first have to word check, then subtract the pre-NaNo words (maths, moi? bleah!) and only then can I enter it into the NaNo page for the cute little graph to tell me how I'm going, how many words I need to write to complete the day, how far behind I am or how far ahead I am and how many words altogether my region has written - we're getting close to a million.

This is a team activity I can totally get behind. I admit, there aren't that many team activities I like, but this is one.

I find I stop every three or four hundred words to update my word count. Procrastination is a wonderful thing, even on something I love doing.

More usefully, I stop every so often to watch documentaries about the Bronze and Iron Age (If such a thing is possible I might have overdosed on Neil Oliver. Hmm. Nah, not possible), to check distances and work out locations or quickly read through pertinent blog posts.

How long would it take for a heavily pregnant woman to walk between Tara and the Hill of Uisneach? How many counties would she walk through? (There was an ancient road between the two? Brilliant.) How long would it take on horseback? Should Lugh kill Balor with a spear or a slingshot - both are correct...

Half my book is set in Bronze/Iron/Myth age Ireland, while the other half is set in present day Scotland and Australia. I still haven't quite got my head around the complicated, interwoven, never-quite-agreeing genealogies of the Fir Bolg, the Fomorians and the Tuatha De Danaan, but I'm getting more of an idea of how I want to batter the old stories into a shape that works for me.

I'm cherry picking myths from here and there and everywhere, working out which versions work best for my story and quietly kicking closely related ones under the table. (The one about the guy who was force fed a vast amount, does a massive poo and then has sex with a woman I think might be some kind of land/fertility goddess. Um. Yeah, leaving that one out. The one about the poet, Cairbre, cursing the high king, Bres, for meanness? that one works well.)

I cannot say how much I love being able to escape to a cool green world when all is heat and mugginess here - interspersed with spectacular storms. I love piecing together and discovering, trying to fit the ever-changing archaeological evidence - very roughly - with the myths.

The more I read, the more I tend to think the Invasion Myths are based on some kind of truth and that I'd love to read more, study deeper. I've loved cramming in so much knowledge. I've missed it. I still haven't unearthed my old university readings book (Pagans, Christians Kings & Goddesses in Early Ireland) but I intend to do it soon. I'm just a tad worried as to how much has changed since then, how much of what I studied has become outdated as new discoveries have been made and new interpretations gained favour.

I wasn't sure I could do it. I wasn't sure it was possible to write a lot, consistently, with the three little ones underfoot and so much going on. I haven't written solidly since before the baby (now the toddler) was born, and it feels good. I'm still a little cautious as to the quality - does baby-brain still have me in it's grip? Am I just producing milk turned into words?

I'm on the homeward stretch - passed the mid-way mark, wish me luck for the next eleven days!

Posted by kirstyrosa at 7:38 PM