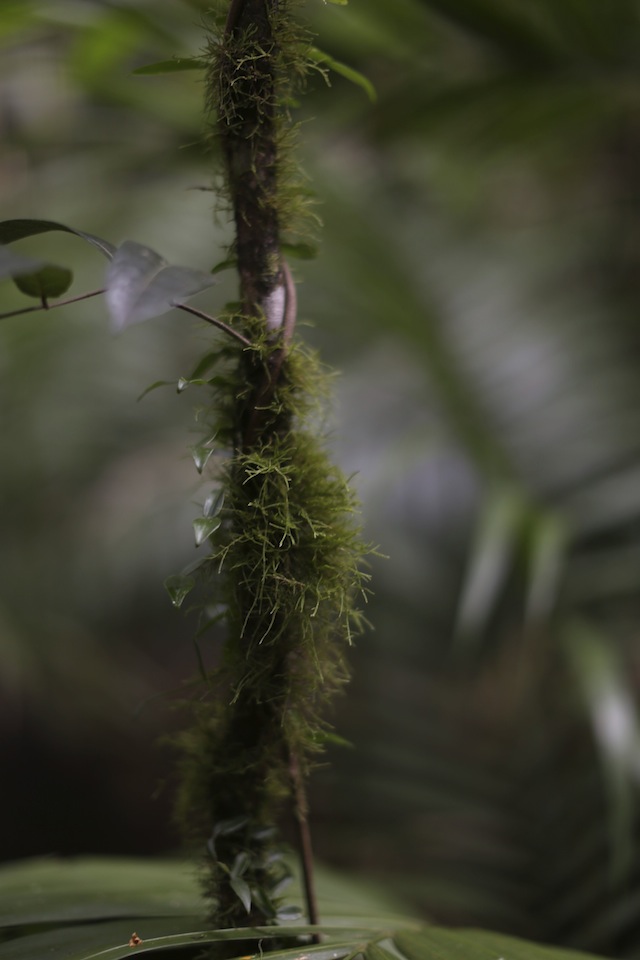 There are certain things one looks for by the end of the school holidays. Outdoors space (to try to stem the ever growing list of breakages), coffee (to bolster the spine) and a certain something to replenish the (somewhat depleted) spirit.

My go-to is a pocket of temperate rainforest in the Sunshine Coast Hinterlands called the Mary Cairncross Scenic Reserve. I found it by mistake once when looking for something else (the Botanic Gardens - whose drive was way to steep for me to even consider - cue tantrum, forgotten when we came across the Mary Carincross park.)

On previous trips we've played at the playground, enjoyed the devonshire teas (with views across to the Glasshouse mountains) and oohed about snakes, pademelons, large spiders and bush turkeys, but on this trip we actually entered the heart of the fifty-five hectare reserve.
(Please note - I probably wouldn't have done this - carrying as I was a large baby, a hefty bag, and a sizeable camera - if I'd known the walk was an hour and half round trip - but I'm so glad that I did.)

The scent - rich and damp and full of life surrounded us as soon as we stepped out of the information centre and into the forest. The callings, whoopings and shrillings of birds was a constant. While our adventure was sadly lacking in snakes, we did see the holes of the giant earthworms (the worms - a few feet long - helpfully mark them by sticking upright leaves in them), a bat colony, a little pademelon (like an undersized wallaby) and some bush turkey compost-nest-mounds.

I also came across information about The Stinging Tree, which will cause 'severe agony for months' with only the lightest of touching and of which I had never heard. The kids went along the path touching everything in the hopes of finding one.  On my return I cast the existence of this tree up to my Beloved and his sister, who laughed at me. 'This is Queensland, what do you expect?'  My sister-in-law assures me that after a few months the agony goes and it's more like an itch. A-hum.

Around us the forest was full of strange noises, lush and green, heavy with moisture, draped abundantly with lianas and full of tangles of roots and vines, and the vast buttresses of ancient trees. Tiny birds flitted and every so often we'd come across brilliantly orange fungi or a scatter of red berries.

Fragments of ideas, jottings for stories, coalesced, as the babe struggled to be down and running in her unsuitable shoes and the kids took turns to hang on my bag and I took one-handed photos, pausing to breathe deep of air as solid as food. 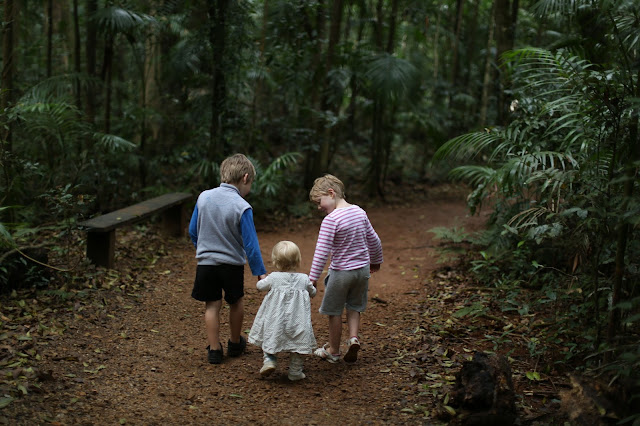 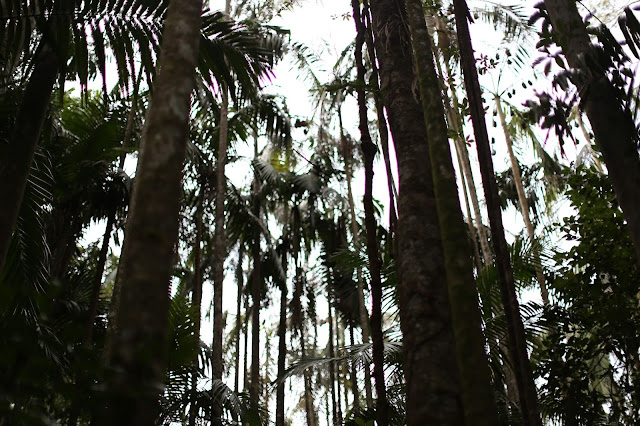 Look carefully in the photo above to see the bats hanging in the treetops. Their pungent scent gives their presence away long before you see them. 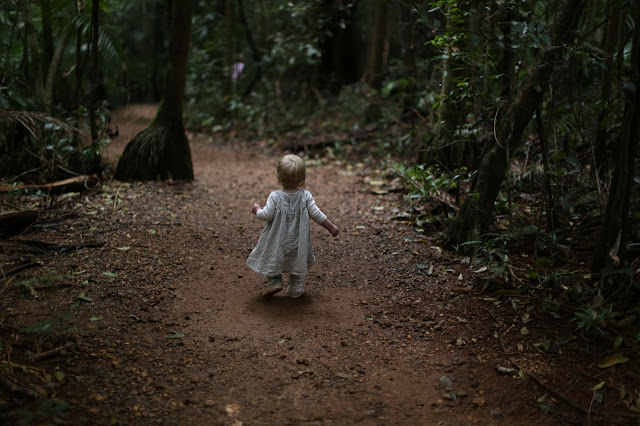 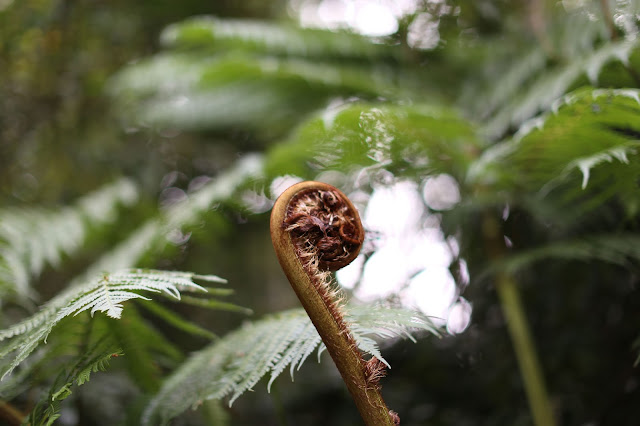 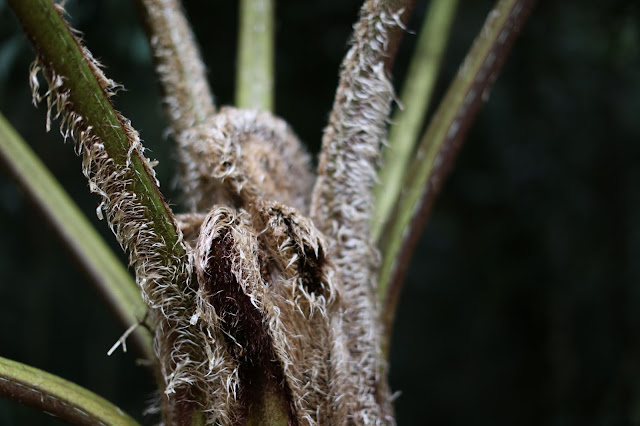 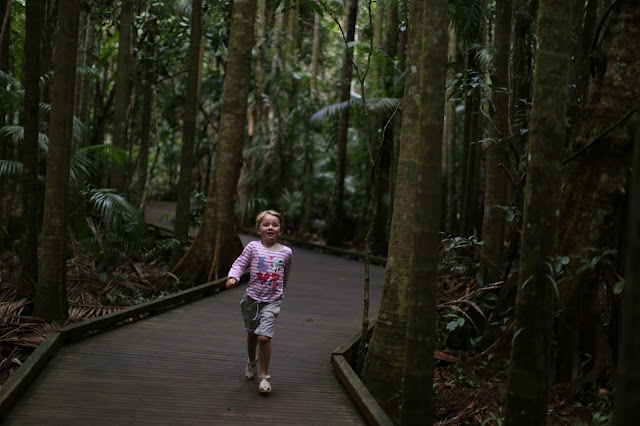 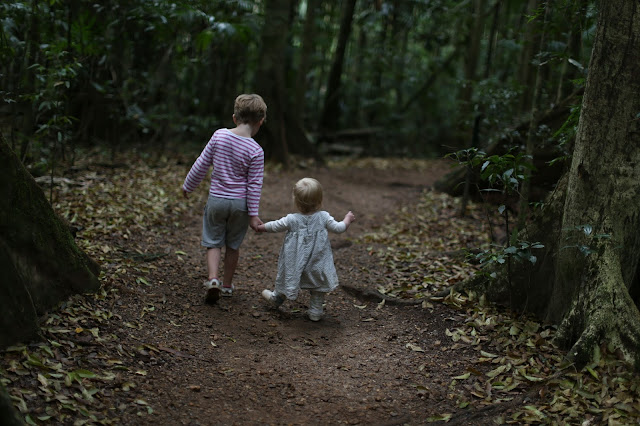 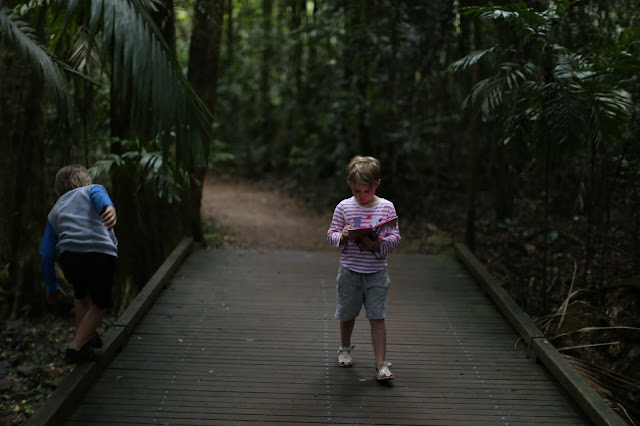 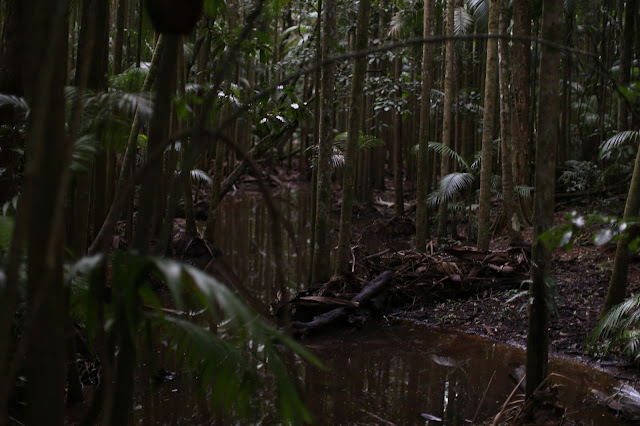 Posted by kirstyrosa at 4:12 PM