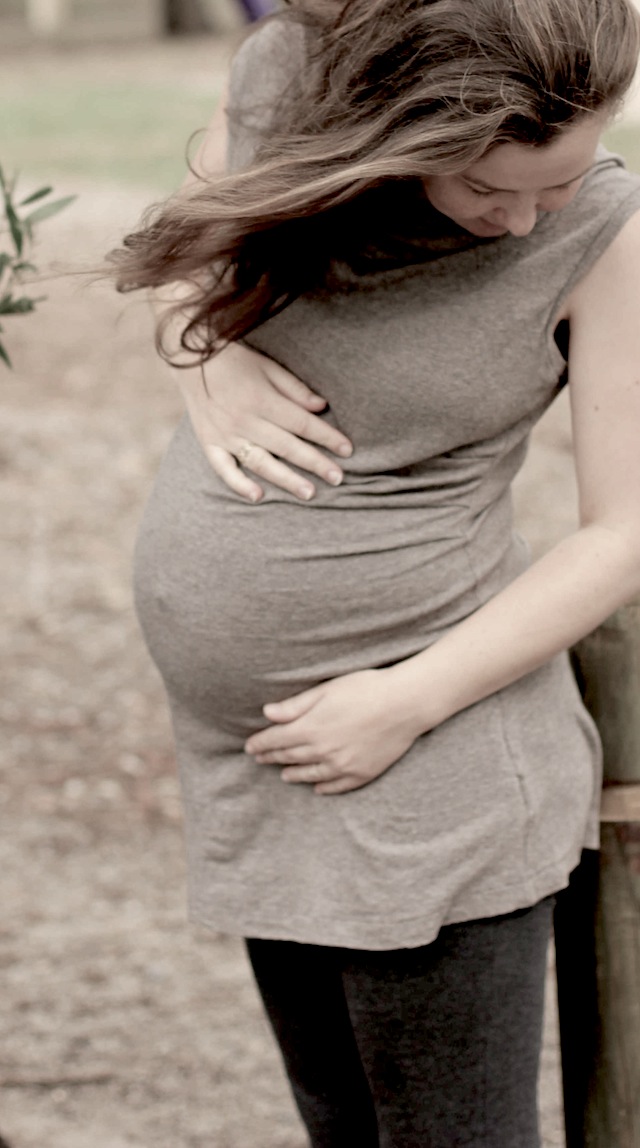 (Week 34 - Wearing: Top from my lovely sister-in-law, leggings from an op-shop )

Littlest, you're at week thirty-four now, and getting some serious size to you.
Your bones are hardening, your immune system is kicking in and your fingernails are fairly complete, although your toenails still have a bit of growing. You are also pushing and punching like crazy.
But please, listen up Little One - you need to flip! As in, you need to do a half-summersault and turn around.
At our last obstetricians appointment it was seen that you'd switched around and your head is now tucked under my ribs. And dear-one, while I completely understand that this is probably much more comfortable - I wouldn't want to be standing on my head for a few months - it is important that you turn around.
We'll be going to the obstetrician again in a couple of weeks, and if you could turn by then it'll save a lot of stress and potential interventions.
I'll do all I can with swimming lots and all, (although I'm not sure how I'll go with the handstands in the water one site recommends, I tend to get water up my nose) but if you could work on it too, that would be grand.
The midwife seems to think that as you're my third after two (fairly) straight-forward births the obstetrician would be fine with a normal birth if you're still breech, and as he's old-school and I believe has a fair amount of experience with breech births, I feel very comfortable with that.  However, if that obstetrician is not on call at the relevant time, a lot of the obstetricians and midwives don't have a lot of experience delivering breech babies - in which case it becomes more dangerous for you and we'd probably opt for a caesarean.
And, well, Little one, I just won't have time to recover from a caesarean. Much as we love you, Littlest, there's no escaping the fact you're a third baby, and as such a lot of your time will be spent schlepping your brother and sister from place to place. We'll be back on the school run pretty much as soon as we're out of hospital, because if there's one thing I've learnt about medical degrees?
They don't accept doctors certificates.
Or time off for dead relatives or babies being born. If you don't do the hours… well, you repeat the year. Your Daddy will be there for your birth, he'll be on rotation in the next ward while we're in the hospital so will probably pop in for lunch and morning teas and things, but unless you come early, he won't be home for any of your first days. Which means that whole resting/non-driving after a caesarean thing?… would not be happening.
You really, really need to turn around. I've been explaining all this to you as we go through our days and you kick and roll, as if in agreement, but so far I haven't felt any major flipping. Of course, there's still a lot of time. Your Nana says I was breech almost up to my birth, so I have complete confidence you'll get onto this in time. (Preferably before we try the 'external cephalic version' manipulation in a few weeks.)
Littlest, grow well, and flip!

Linking with the lovely TOI of Life of TOI and Erica of To the Sea for Blogger Baby Boom.

Posted by kirstyrosa at 8:20 PM