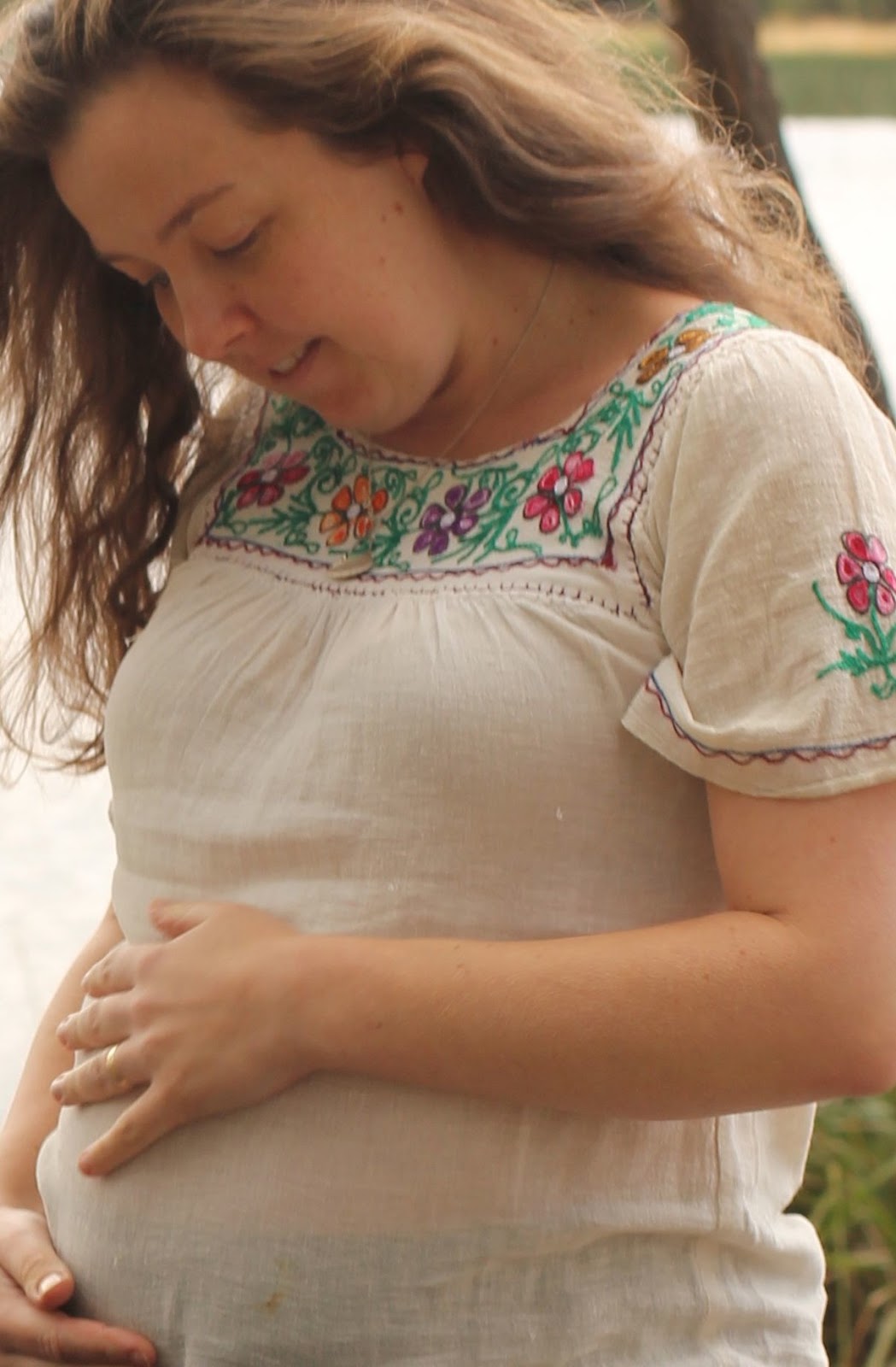 This is a little late, Littlest.
We're already up to week thirty-four (woosh, but time is whizzing by!) But let's pretend it's still week thirty-three.
You continue to wiggle and squirm almost constantly and when I have a braxton-hicks I can feel the hard outcasing of your womb from half way up my ribs right down to the top of my thighs. I'm not entirely sure if you've moved around or not - kicking or punchings come from all areas. Your back does seem very firmly on my right side though. The braxton-hicks are coming with increasing strength and for increasing amounts of time and are increasingly uncomfortable. If I'm walking while one hits it feels a bit like someone dropped a concrete ball on my bladder and cervix. I try not to think that it's only going to get more intense from here, and rather concentrate on it being practice for you coming out easily and quickly.
Night-times are still very long. Whichever side I lie on I end with aching hips, and every time I roll or sit up my pelvic bones are incredibly painful. I'm incredibly grateful for the heat-pack your daddy got me for my birthday, and he re-heats it three or four times a night. We're seeing the obstetrician tomorrow so hopefully he has some ideas.
Up until now I haven't paid much attention to the whole 'coming out' part of you being inside me. I've pushed it aside and thought 'there's plenty of time for that later' and concentrated on how you're growing each week.
Now as there's increasingly less time, I'm thinking about it more and more. Not just the incredible moment when we finally get to meet you and hold you and see who you are and admire your little fingers and toes, but you know, the whole coming-out.
Your Daddy and I are still watching One Born Every Minute every week, a documentary about a maternity ward in the UK, but I'm watching it with an increasingly furrowed brow as realisation sinks in that this is becoming ever more relevant to me.
Having been through it twice, my thoughts are possibly more prosaic than they were with your siblings. With your brother I was sure that I'd breath him out in a 'rush' in the birthing pool. With your sister I was hoping I didn't bleed as much as I did with your brother and she was a leetle bit quicker.
With you,  Little one, I want us both healthy on the far side and apart from that I'm more concerned about whether your grandparents will arrive in time to look after your siblings or whether they'll be in the birthing rooms when you arrive. While I think your sister would love being around for your birth, I suspect your brother would find it a bit traumatic. (Obviously, this isn't the whole truth. I will, of course, be handing over a carefully researched birth plan based on current best practice, but it will only have about seven points on it and be half a page, unlike the - rather amusing, in retrospect- novel I prepared for your brother.)
I'm also (finally) letting myself prepare your space. We pick up your bassinet on Saturday (thank-you ebay and Choice Magazine) and I'm very excited. I was a bit surprised that of the twenty-four bassinets Choice reviewed they only deemed two to meet safety standards, especially as the one I wanted wasn't among the two, but in the end we decided to go with one of the recommended one. What can I say? Your Daddy and I are both suckers for the stats.
And our hospital bags are nearly half-way packed. There's still a lot of things I need to re-wash and pick up from your grandparents, but I think within the next two weeks we should be all ready in case you make an unexpectedly early appearance. I'm still half-hoping that you'll decide to make an appearance around the thirty-eight week mark rather than the forty-one weeks your siblings chose for their emergence. And if you do… that's only five weeks away!  Maybe I'd better hurry up on the preparations!
Car seats are of course high on our list of things-to-do. Namely, which capsules will squeeze best next to your brother and sisters car-restraints, and rate highly on safety. Decisions, decisions! We've still got the capsule we used for your brother and sister, and we might try it out soon for size, but as it's been out in the shed for the last three years, I'm a tad worried about it's condition. Next weeks task!
In the photo above I'm wearing a maternity top that your Grandmother wore when I was the baby growing inside. I'll have to dig out the photo of her wearing it when she's holding me as a baby, it's one of my favourites. So far, I've avoided the temptation to buy any new stuff (apart from a brief hiccup around Christmas when I directed my Beloved as to my Christmas present and spent Christmas money) and I haven't felt like I've needed anything extra. Of course, nursing clothes might be a different story!
Your sister and brother are still very excited about your arrival. Your sister told you a long story this week and gives my tummy big kisses. Your brother gives my tummy reassuring pats. Neither of them remembers you when they decide to climb on me. And it's so hard saying that I just can't pick them up anymore. I can't lift your brother up onto the flying fox, I can't carry your sister around… It's hard for them to understand.
Grow well Littlest, not long now!

Posted by kirstyrosa at 7:31 PM