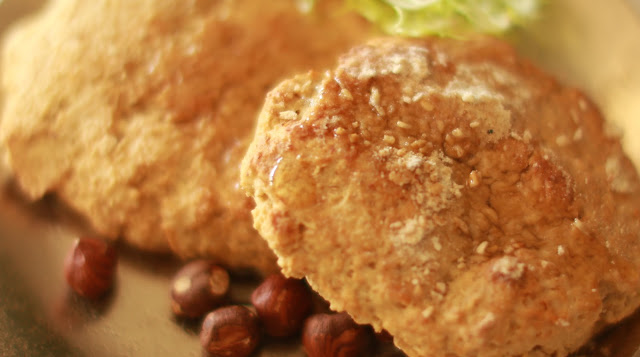 Between the summer solstice and the autumn equinox, the Gaelic people of Scotland and Ireland celebrated Lughnasa. This fell roughly on the first of August.

Lughnasa was one of the four seasonal festivals and celebrated the beginning of the harvest. As the name suggests, it was also the festival in honour of the god Lugh.*

The first of the crops was offered, a bull was sacrificed, there was feasting and athletics, holy wells were visited and mountains jaunted up while folk ate bannocks and bilberries.

Being of a somewhat staid disposition, I decided to mark the occasion by eating the food of the time when Lugh was still a respected deity for the week leading up to the big day.

And I failed abysmally. I went to bed each night saying tomorrow I'll go Iron Age all day. Yep. Tomorrow it is. I lapsed today, but tomorrow's The Day. And then I'd wake up and realise the whole prospect of getting out of bed without either a coffee in my hand or the promise of a coffee in my hand in the immediate future was frankly absurd.

However, apart from those small lapses, and a few other occasions when I decided coffee counted as iron age if I just added hazelnut flavouring, I kept most meals fairly Iron Age.

I was most successful with meats. Roast pork (cooked in apple cider), roast lamb, roast salmon, roast beef and bacon were all big hits - particularly with my Beloved. (I was a vegetarian when we met, and had been for a dozen years by then. For the first year or so he sweetly tried not to eat meat in front of me, although I assured him it wasn't necessary. Cravings during my first pregnancy did away with that...)

Breakfast was easy - porridge with butter and honey was no hardship. I'd read something on fostering which said a kings son could have both butter and honey, while a chieftains son could only have butter, and I decided myself at least equal to a king's son. Although to be honest I generally added cream as well.

Vegetables, fruit and bread were the difficulties. It was surprisingly hard to work out exactly what vegetables were available. Carrots, but only white ones? Wild garlic. Water cress. (Still looking for where to buy some.) I did manage to get some endive and kale but I wasn't quite sure how to cook the kale. It looked a little scary.

Blueberries, strawberries and hazelnuts I ate in abundance - although the hazelnuts tasted just a little bit stale. I can safely assure you that pears cooked in butter with nothing else are divine (although I am a little worried about when pears arrived n Ireland and how sweet they were - and similarly with apples - there were definitely apples - but were they sweet apples?) Nettle tea is not as horrible as you might think. I managed to find a tea made of dandelion root, but it had added sugar, so felt a bit like cheating so I only drank it once.

Honey was my dearest love during the week. There were two days between my beloved throwing out one lot of honey a fly had drowned in and it being replaced when I was honey-less. These were not good days. There was pacing. And gnashing. And I. Need. Honey-ness. Addicted to sweetness? Why yes, I believe I might be. It was definitely interesting to see my main addictions - coffee and sugar -weren't a possibility back then. The sheer strength of my cravings is something I'm going to keep in mind for my time-travelling characters.

Bread was slightly more complicated. The Iron-Agers definitely ate bread, but not quite as we know it. I tried two different recipes - both from Ali Isaac's very informative blog. The first recipe for griddle cakes was, as she implied, not very delicious. As in, hardly edible. I had not believed it possible for something with that much butter to taste so bad. It was a mess of spelt flour and butter (I even added some cream) and then fried it up... and hmmm. Eaten with cheese, blueberries and hazelnuts it was almost palatable... but... 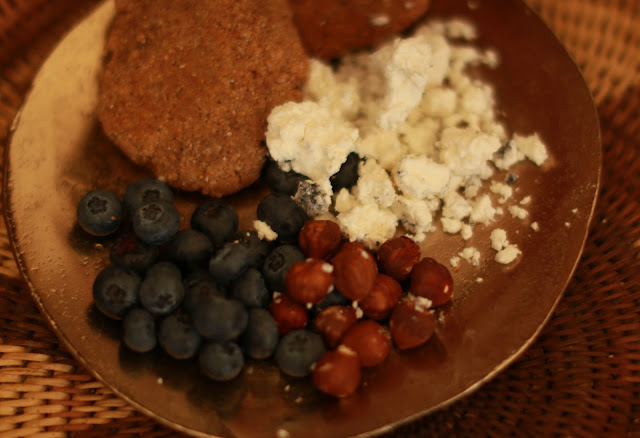 The second recipe, which I varied slightly, was much better. I wanted to make a traditional bannock for Lunasa, but most of the recipes I could find involved baking powder, which wasn't around back then. So I used Ali's recipe for barley bread, but used oatmeal instead of barley. The ale gave it a lot more life and added a yeast-y, bread-y smell and taste. (I also added a smidge of honey) and as I'd used up all the butter I put it in the oven to bake rather then frying. (I knew I should use lard to fry, but I'm still a bit leery.)

Verdict of an Iron Age week - my Beloved loved it. Returning from work to a large chunk of cooking dead-stuff held a curious allure for him. I was quite partial to all the cream. (This was not a diet to loose weight or become remotely healthy.) The blueberries were also lovely. While I suspect your every day Iron-Ager had quite a monotonous diet of gruel, I felt free to decide I was one of the aristocratic sort with slaves and all to cook for me, and the food wasn't bad, once I got used to the restrictions. (Please note, I never got used to the coffee restriction.)

On a side note, there's an interesting article mentioning the last meal of the Tollund Man (a sacrifial victim found in a bog.) His meal was a porridge of barley, oats and rye, but to that was added a good dozen different seeds, many of which have notes such as *may cause rashes, *may cause blistering to the skin,  so it was hardly appealing. On the plus side, two people who ate a recreation of the meal said that after tasting the porridge, death seemed the better option. 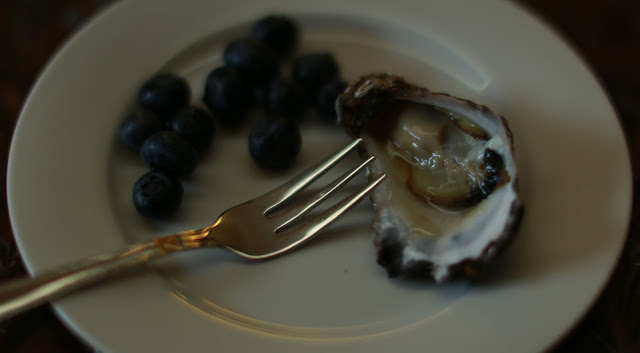 (My last Iron Age meal of the week. Well, that and the pizza and birthday cake... but I at least began the meal in an Iron-Age way. Unfortunately, I do not actually like oysters. But it was slightly less disgusting than previous times I've tried it.)

*Who I have appropriated as one of my characters for a series I'm working on, and whom I'm quite partial too.