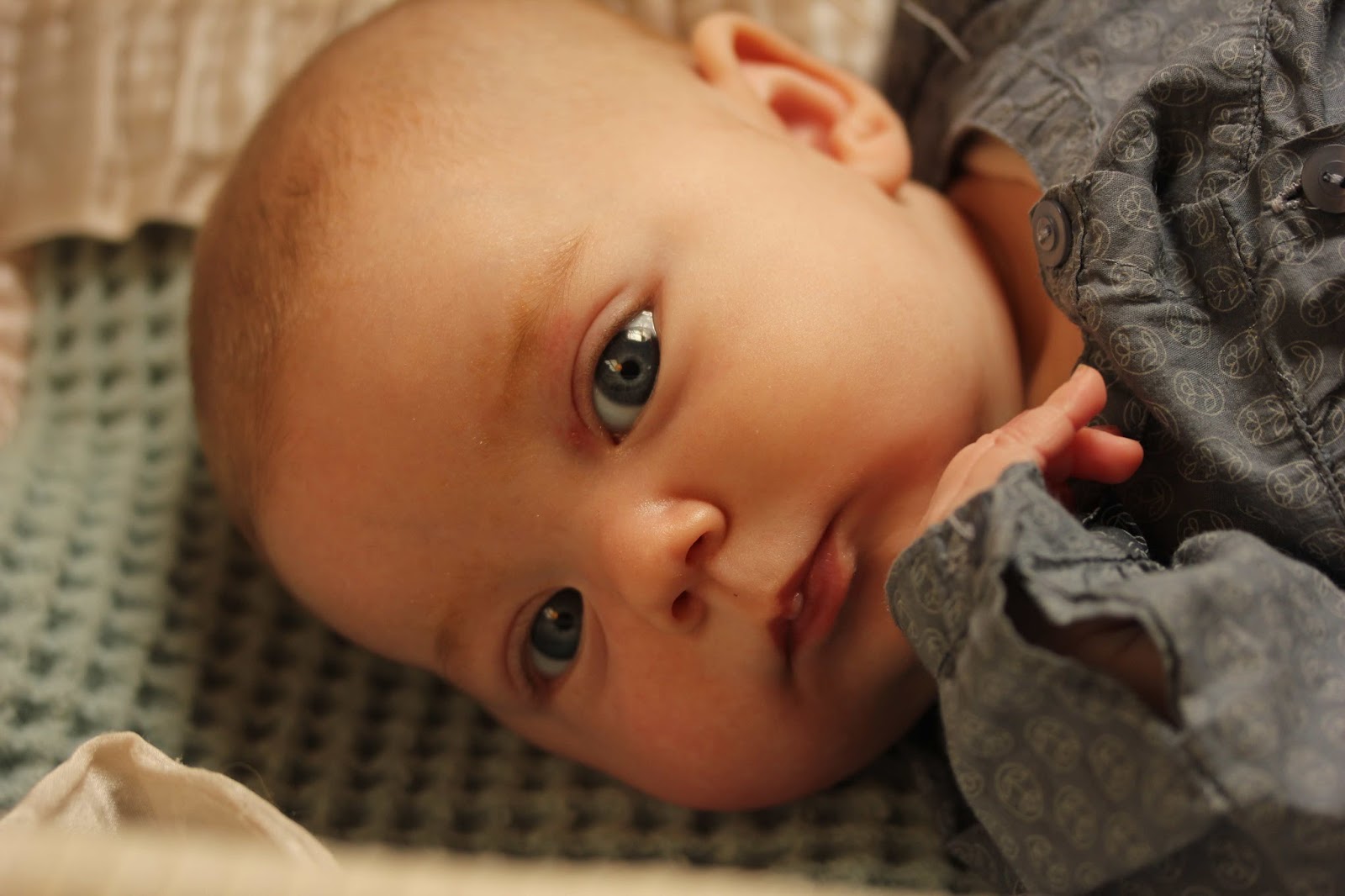 It is so hard to believe that this time last week you were in hospital, connected to tubes, unmoving but for your little heaving chest.

The smiles now race across your face,your arms and legs are in constant (slightly jerky) dance. You have discovered your fists and suck upon them furiously, or bring them up to sit together beneath your chin.

Your little toe-curlings are the sweetest. While I feed you I hold one little foot, and you press against my hand, curling your toes up on my palm. Sometimes, if you feel the milk is not behaving as it aught, you rapidly punch one little arm, as if it were a milk-pump. It always makes me giggle.

You have been checked this week both by the child nurse and the paediatrician - the paediatrician - who happened to be the Chief Medical Officer of the hospital, won my heart by saying you were so fetching you should be on the front cover of a baby magazine. I am just trying to work out which one I think it should be. (Yes, I know he probably says that to all the babies, but I don't care.)

You have not left the house for most of the week, recovering inside, in the warmth, secreted away from Other Peoples Germs - and also keeping you away from other babies you might infect. The virus that gave you the bronchiolitis is so common that eighty percent of children get it before the reach two - but still.

Your Nana and Grandpa caught the train up from Melbourne - tag-teaming so they could make their appointments and work in the city - when one was getting on the train, the other was getting off, walking down from the station to arrive in a flurry of rain.

It has been strange doing the school run without you - but I have been very glad you have been home, warm and dry and held by someone who loves you, for the week has been wet and very misty. Often we have driven along with the glass all silvered with water, run over with reflections, the mist so thick we have been unable to see around. A fox ran across the road one morning, just in front of us, and  black calves have been along the roadside.

Your Daddy worries I will turn you into 'the sickly' child. The one who is ill as a child and forever after is cosseted and kept indoors. I think he gets it from the fantasy books he reads - and they get it from history - the sickly young princes. However, they come from a time without brilliant hospitals. And as soon as you're a little bigger, and the winter is over, I'll stop cosseting as much. I know that you are a little warrior, I saw how bravely you fought when each breath was a struggle.

The school holidays start this week - my littlest one. There will be less time for me to spend admiring you as your brother and sister command the house. You will get lots of in house entertainment and clumsy, well meant kisses.

Two months, Little one. You've been with us in the world two wonderful months, and we're so glad that you're healthy again. That you're ours, that you're you.