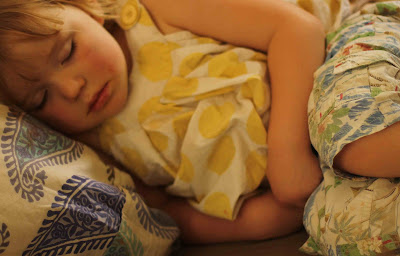 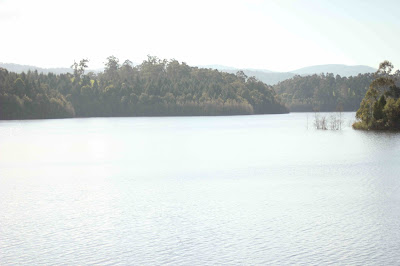 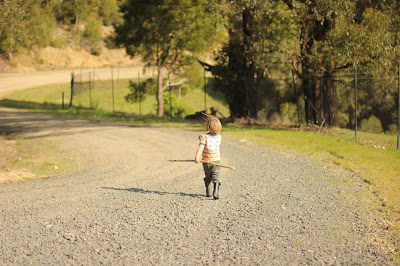 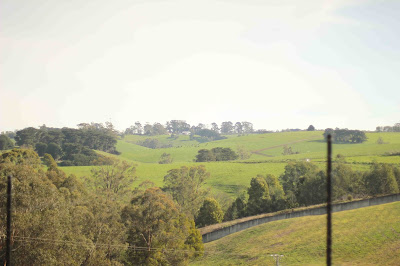 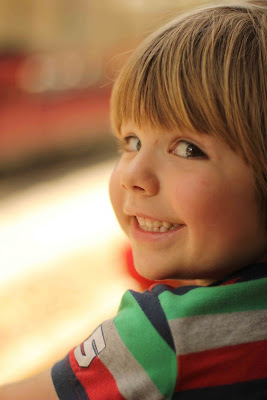 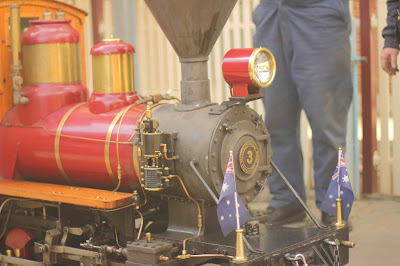 - Poppet, napping. She doesn't have a set nap time anymore, but that day she took herself off to our bed, curled up and fell asleep. We were having unseasonably warm weather - now gone. I'm presently wearing two jumpers.
-Tarrago Reservoir. We decided to find a midway point between 'neighbours' that live at the foot of Mount Baw Baw and decided on Tarrago Reservoir. We've often driven past it and I've always commented I'd love to see it close up. It was stunning - although the actual water was fenced off to keep it cleaner, there was a lovely park area with picnic seating and barbecues.
-Sprocket - marching with stick.
- The green hills of home. I keep meaning to take more photos of the rolling, richly green hills that surround us. Every time we go for a drive I ooh and aah over them. These were looking across Tarrago Reservoir, but the land all around is similar.
-We arranged a meet-up with one of the Sprocket's friends who's been overseas for most of the year at the miniature railway at Eltham. It was a massive hit. The trains go through tunnels and over bridges and the bells of level crossings ring out. The kids had a ball and we'll definitely be back. We were on a diesel train so it went quite fast.
-One of the trains at the miniature railway. My great grandfather used to make model trains, about half the size of these ones, but they could still pull about 7 kids around the mini track in his backgarden, all of us wearing big coats and hats to protect us from the cinders, so I got all nostalgic.

Joining with the wonderful Em of The Beetle Shack for weekly stills. We actually stayed in the city for the weekend and I had plans for all sorts of fascinating city shots... but somehow I never got around to getting my camera out!
Posted by kirstyrosa at 9:11 PM