The Sun Egg and Goldie Beatle 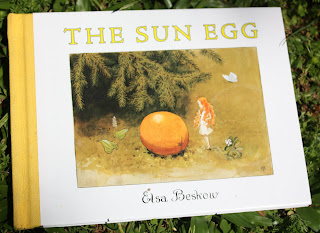 Floris Books, First published Sweden 1932 as Solagget (with two dots I don’t know how to do over the ‘a’.)
This book is a recent discovery for me although it was first published in 1932. (I feel very behind the times.)
My Aunt and Uncle sent my daughter, the Poppet, this book when she was born and although I never read it as a child, it’s the kind of book that you read and think ‘aaaw’, and wish that you had.
The story is whimsical and the illustrations enchanting and as soon as the Poppet is old enough (and probably before) I will read it to her. Hopefully again, and again and again.

‘A large orange egg has fallen into the wood. “It’s an egg!” decides the elf. Soon she and her friends find out what it really is; but not before the sun egg is lost and the elf begins one of the best adventures she ever had.’

I know that the Poppet and the Sprocket will love knowing what the ‘sun egg’ really is, and enjoy imagining flying on the bird like the little elf.
The illustrations bear some similarity to Cicely Mary Barker’s flower fairies but are executed with more verve and humour. (Not that I’m knocking the flower fairies, who get big nostalgia ticks in my book) Think an adventure of Thumbelina.
I think one of the reasons that I so love The Sun Egg is that it reminds me of the stories that my great grandfather used to tell. His stories were always about ‘the goldie beatle’ who would come and shrink you, and whoever was with you, down until you were tiny, tiny, tiny, as small as a beatle and then you would get on the goldie beatle’s back and head off for an amazing adventure.
I miss those stories.
Sigh.
I doubt I’ll be able to re-tell them as well as Great Grandad could, but hey, I’ll try.

Posted by kirstyrosa at 2:50 AM