Considering Choices (to veg or not to veg) 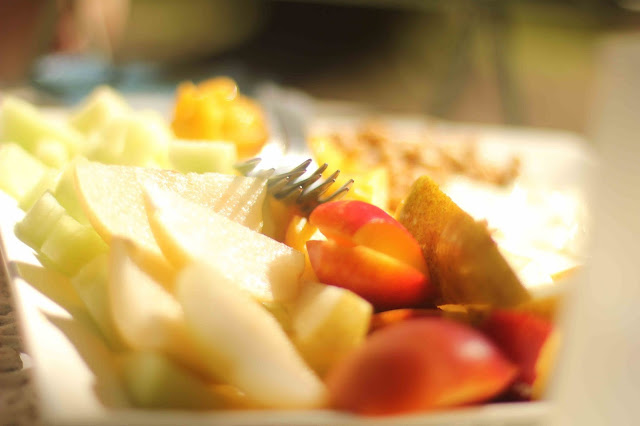 Beloved and I were watching netflix recently, on one of those rare occasions when the kids were all asleep and we were both still awake, and we ended up watching one of the many food shows they have.

And this one was about the perils of eating too many animal products on our health.

Now, I've long been sold on how inhumane our treatment of the animals we eat is, but since I started having dreams about steak when seven months pregnant with my firstborn  and gave up twelve years of vegetarianism (with the odd stint of veganism thrown in) I've been a ravaging omnivore.

I've put vegetarianism in the too-hard basket and told myself I'm eating meat and drinking milk - 'for the children.'

And it's true - four kids in eight years, and extended breastfeeding and I'm feeling somewhat... depleted. But... the show reminded me that actually, a balanced vegan diet can be healthier and less depleting than a meat and dairy rich one.

In a moment of weary weakness, my Beloved, succumbing to the shows comprehensive studies and case studies showing the benefits on heart disease, cholesterol and diabetes, said he'd try a plant based diet with me. Win. ((Beloved's addit: The ecological studies showed association and not causation, thus should be interpreted with caution.  I mean really -- if you did a double-blinded randomised controlled trial I'd be more convinced.... but.... meat... is.... good))

Now, I'm not saying this is going to be a super healthy food choice - my previous vegan attempts taught me a lot of the not so super-healthy options (fried bread with baked beans anyone? walnut and cinnamon scrolls, deep fried vegetarian spring rolls, honeyed macadamias, pineapple fritters...) but I do think it will be a lot healthier. (To be honest, healthier than Beloved's present diet of crisps, instant coffee and energy drinks wouldn't be precisely hard - physician heal thyself...twelve hour shifts without a meal break mean bad choices when work finishes...)

But my diet pre-meat was a lot healthier, with a much bigger veggie and pulse intake. Lentil soups were a staple and dhal, felafel and hommus were all regulars. Did I mention I weighed 20 kilos less back then? (Although that could just be the four kids - as the change was simultaneous it's probably fair to take some from column a. and some from column b. for causes.)

I'm still going to call myself a vegetarian, not a vegan because I'm not going to go ultra strict - the occasional free range egg? Not a problem. Honey? in moderation, and a lot of it if I get a cold. If I'm sharing a veggie pizza I'm not going to worry about a bit of cheese and if there's a particularly nice cheese (or chocolate) on offer I'll probably try a bit. If Beloved catches a fish, you bet I'm going to eat it. It's even possible Christmas and Easter will see me with a bit of lamb or (free range) roast.

But... I am going to try for a mostly plant based diet. This is particularly hard because I am the Dairy Queen. I've never met a meal I didn't think improved by a dash of cream or sour cream and custard is one of my big loves. (After the kids of course, but possibly not by as much as it should be.) And don't get me started on cheeses. Haloumi, goats cheese, brie... Sigh.

However. With my odds of long term diabetes markedly increased, wanting to set a healthier model for the kids (whose diet is frankly appalling) looking back to how much healthier I was pre-meat (and ignoring the fact I used to walk 5k a day then as opposed to just toddler wrangling) I think I'm ready to make the change.

At least, the dissonance of being totally appalled and heartbroken by how we treat our animals and the cost to the planet and not doing anything about it, is getting too much.

Here's looking forward to lots of bowls of crisp, refreshing salad, bursting with colour, avocado and salad sandwiches on fresh-from-the-oven-bread, and really savouring the delight of a fragrant mango fresh from the tree.

Any tips from those who've managed vegan long term?
Posted by kirstyrosa at 3:00 PM