Not Quite at First Sight.... 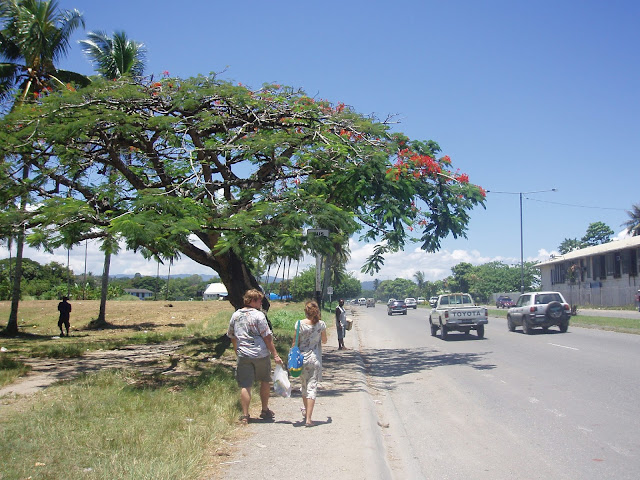 Beloved does not want his face bandied around the internet so I'm a little limited in photo choices!

It's ten years since Beloved and I first met. So of course I'm feeling all nostalgic.

We met at Honiara Airport in the Solomon Islands. I was fresh off the plane - OK not, so fresh -I was tired, sweaty, and overladen - and Beloved was checking out the new arrival of volunteers.

I'd been packing and doing the final clean out of my rental house until late the night before, then caught a hellishly early flight from Melbourne to Brisbane and then onward to the Sols.

My ingenious plan to avoid baggage limitations (I'd been caught out before with both of my suitcases separately breaking weight restrictions, and having to do major repacks at the airport) was to wear a raincoat with a heap of pockets and pack each pocket with books. Which sort of worked. But when I stepped out of the plane and began walking across the tarmac and the full, familiar heat and humidity of the tropics hit me, I regretted lugging the heavy coat as well as my overladen bags.

After the long wait going through customs and then waiting for luggage, I joined my intake of volunteers and we headed out of the arrivals door and there was a large, overbearing stranger, I vaguely recognised from photos as a fellow volunteer, demanding hugs of all the newcomers.

I believe I strode past with a sniff, or possibly just a dismissive head shake and eye roll. The rest of my intake were a lot more accepting of the welcome. We loaded into the back of a ute, balancing on our backpacks and were away to our new home.

We met up a few times over the next month. Not-Yet-Beloved was working at the Ministry of Health and the hospital fixing computers and I was working at the National Library, and they weren't far from each other. We went out as part of the volunteer group to a few meet ups at the yacht club and a few nightclubs, but we didn't really connect. Again, my thoughts were 'Over-the-Top', and his thoughts were 'snooty, non-hugger'.

And then there were the elections. The ones I'd asked an Ausaid guy back in Canberra 'so, are you expecting any trouble with the elections?' (the Solomon's had, after all just come out of several years of 'the Tensions' and Australia had sent troops in) and he'd rolled his eyes at me. Not at all.

I came back from a visit to a volcanic island with a temperature and severe gastro and the city erupted into riots and the whole of China Town was burnt down and most of the night clubs we'd been so recently dancing in. We went into lock-down, although shamefully, my main thoughts were whether there'd be enough toilet paper to see me through.

A few days later we were told we were to be evacuated, and my thoughts were ' I can get to a doctor, yay.' Not-Yet-Beloved, like lots of earlier intakes of volunteers, saw no point to leaving and wanted to hide and stay. He wasn't given the option and came on protest. I started throwing up in the filthy toilet in the wooden shack the army were processing us in for the flight, and then discovered that diarrhea on a hercules that has a little fold down toilet surrounded by curtains is deeply humiliating.

Not-yet-Beloved caused a diplomatic incident by leaving our group and catching a plane home as soon as we reached Townsville. In between throwing up every hour, on the hour, that night in the hotel they brought us to to de-brief (which also had filthy toilets, I had time to observe many times over the night) I spared a few seconds to think 'idiot.'

Things calmed down, and a month later we met up again (I'm not sure we even nodded at each other) in Brisbane airport, joining the other returning volunteers. Quite a few had decided not to return.

But then... my computer broke. The one with all my writing (not backed) my photos, my music. Everything. And after trying a few other computer fixers, my housemates, who were good friends with Over-Familiar Guy, pointed out that his job was fixing computers.

And I could be very, very nice to someone who could fix my darling computer.

Posted by kirstyrosa at 3:02 PM